What to Know About Every Single Winter Olympic Sport in 2018

From a 17-year-old snowboarding star to a gold-medal-hungry women’s ice hockey team, Team USA’s athletes competing in the 2018 Winter Olympic Games in PyeongChang, South Korea, are looking to make a mark.

The official roster for Team USA was finalized just weeks before the 2018 Winter Olympics started with the Opening Ceremony on Feb. 9, and the competitors in the 15 Winter Olympic sports each bring a unique story to the games. Maame Biney is a 18-year-old who already made history as the first black woman to qualify for Team USA’s short track speedskating team. Making his return in 2018, Gus Kenworthy is a freestyle skiing star who became one of the first openly gay male athletes to qualify for a U.S. Winter Olympic team. And Chloe Kim is a 17-year-old snowboarding phenom who is the favorite to win gold in the sport for Team USA.

As for how the American athletes will fare against stiff competition in PyeongChang, viewers will have to wait and see. But here’s what to watch for as Team USA competes in each Winter Olympic sport in 2018:

Reigning Olympic gold medalist and overall world champion Mikaela Shiffrin is poised for another triumphant alpine skiing run during the 2018 Winter Olympics in PyeongChang. When she was just 18, Shiffrin became the youngest athlete ever to win an Olympic gold in the Winter Olympic sport of slalom — an event that involves skiing downhill between poles and gates — a gold medal she’s trying to earn yet again at age 22.

Shiffrin has the second-most World Cup victories of any U.S. female skier — just behind Lindsey Vonn, who is aiming to make a return to the Olympic podium in 2018. Injuries have plagued Vonn in recent years, but the veteran skier earned her first World Cup win of the season in December — just months away from PyeongChang.

That will be a leap for the athlete, who earned Team USA’s highest ever finish in the Winter Olympic sport with eighth place in the men’s 20-kilometer during the Sochi Olympics in 2014. But in 2017, Bailey won the U.S.’s first world championship gold medal. And in PyeongChang, Bailey hopes to once again make history.

He was the first U.S. athlete to officially qualify for the upcoming 2018 Winter Olympics.

On the women’s side of the Winter Olympic sport, Susan Dunklee is one to watch. The 2014 Olympian earned a silver medal in the mass start at the world championships in 2017 in Austria.

Leading the women’s bobsled team in 2018, Elana Meyers Taylor is hoping improve on her silver from Sochi with gold. Meyers Taylor was the first American woman to ever win a bobsled world championship in 2015.

The two-time Olympic medalist has also advanced gender equality in the sport. She has competed in the 4-man event with three male brakemen, a first for the Winter Olympic sport that had required women to race only two-person sleds.

The men’s side lost Olympic great Steven Holcomb, who died in 2017. The multiple-Olympic medalist made history in the Winter Olympic sport in 2010 when he won the U.S. its first gold in the 4-man bobsled event since 1948.

The women’s cross-country skiing team has made significant strides in recent years, with its best athletes scoring medals and making the podium in international competitions.

World champion Jessie Diggins is leading the Winter Olympics team into PyeongChang after landing fifth in this season’s world cup standings, according to Team USA’s website. Teammate Kikkan Randall won a world championship medal in the sprint just after giving birth to her first child, and Sadie Bjornsen began her world cup season with a second-place finish in November in Finland.

While the U.S. trails behind European nations in cross-country skiing, Americans have improved in recent international competitions. In February 2017, Diggins and Randall made history when they earned silver and bronze medals in the world championship sprints.

Team USA is hoping to return to the podium after a more-than-decade-long curling drought. Four-time Olympian John Shuster will be the skip for the Winter Olympics team once again; he was on the 2006 team that won Team USA’s historic bronze medal. His 2006 teammate Joe Polo will also compete in PyeongChang.

The U.S. has an extra chance to earn a curling medal this year, with the addition of the new mixed doubles curling event. In December, siblings Becca and Matt Hamilton secured their spot to represent the U.S. in the new event. They bested Shuster and Cory Christensen for the spot, as well as Polo and Tabitha Peterson, who had won bronze at the 2016 World Mixed Doubles Championship.

A rising figure skating star, Nathan Chen was the first U.S. man in eight years to win the ISU Grand Prix Final in Nagoya, Japan — the last big-ticket international competition before the 2018 Winter Olympics in PyeongChang. He beat Japan’s Shoma Uno by less than 1 point.

Chen has excited Team USA fans who are hoping for a men’s singles medal this year.

Other figure skaters to watch: Siblings Maia and Alex Shibutani. They are 2017 world bronze medalists and two-time U.S. champions in ice dance hoping to follow Meryl Davis and Charlie White’s historic gold in Sochi in 2014.

The halfpipe and slopestyle skiing events, a sport new to the Winter Olympics in 2014, will have a number of Team USA athletes to watch — particularly Gus Kenworthy, who earned silver in 2014’s slopestyle. Kenworthy has landed on the podium for the halfpipe in international competition as well, including a halfpipe win during his 2015-16 season at the U.S. Grand Prix.

Kenworthy’s life off the slopes has also broken new ground. He came out in 2015, and could become the first openly gay male athlete to compete in a Winter Olympic Games.

Also at the PyeongChang games, Olympic champions Maddie Bowman and Joss Christensen are both hoping to defend their titles from 2014.

The U.S. women’s national ice hockey team is gearing up for another intense match against rival Canada. And with professional men’s players out of the picture this year because the NHL barred players from competing in the Winter Olympic sport, the women’s team is the center of attention.

Team USA won silver in Sochi in 2014 after a 3-2 overtime loss to Canada. But the U.S. is looking to make a comeback against its northern neighbor this time around. Recent international matches have gone back and forth between the U.S. and Canada, with the U.S. posting a 5-2 win against Canada on Oct. 22, and a 1-5 loss just three days later on Oct. 25.

Brianna Decker, currently Team USA’s top scorer, recently told NBC Sports that success in Pyeonchang means “a gold medal.” As for Team USA’s rivalry with Canada, Decker says, “Though some of us may be friends off the ice, we are not friends on the ice.”

Members of Team USA’s men’s and women’s long track speedskating teams aim to get on the podium in 2018. Brittany Bowe is making a comeback in the Winter Olympic sport after suffering a concussion that kept her off the ice for months. She holds the world record in the women’s 1,000 meter and earned bronze in competition this year — a title that boosted her confidence following her injury, she told NBC Olympics in October.

This Winter Olympic sport has long been a U.S. stronghold in the Winter Games, with returning athletes including four-time Olympic medalist Shani Davis, Olympic bronze medalist Mitch Whitmmore and 2016-17 Grand World Cup champion Heather Bergsma. But skaters failed to win any medals in 2014 amid controversies over new uniforms and questionable training decisions.

Luge athletes for Team USA have high goals going into the 2018 Winter Olympics — and standout Erin Hamlin may lead them there.

The three-time Olympian won the U.S. its first medal ever for singles luge with her 2014 bronze, and she hopes to stand a little higher on the podium in 2018. Hamlin is a two-time world champion, including winning the title in the 2017 spring race at the world championships.

“I do think the U.S. can win gold,” Hamlin recently said. “In what, I’m not sure, but in something though.”

The 10-person luge team also includes Tucker West, who at age 18 was the youngest luger to qualify for the Olympics in 2014.

Bryan and Taylor Fletcher of Steamboat Springs, Colo., are two dominant figures in the Winter Olympic sport for Team USA. The brothers are both former Olympians and were on the U.S.’s 2013 world championship team, which won the bronze medal.

Bryan, the elder brother, brought in four top-15 finishes in international competition a year ago, according Team USA. The nordic combined athlete overcame cancer as a child — a difficult time during which he found happiness in ski jumping.

Taylor competed in the 2010 and 2014 Winter Olympics and, among the events within nordic combined, is best at cross-country skiing.

Team USA faces a difficult challenge this year, however. New scoring guidelines for this Winter Olympic sport now stress the jumping portion of the event — which is not Team USA’s strong suit.

World record holder and Olympics medalist J.R. Celski will lead the U.S. men’s team for short track speedskating in PyeongChang. The team includes John-Henry Krueger, who has medaled in international competition. Aaron Tran, a 21-year-old, also qualified to compete for Team USA, securing his spot after placing second behind Krueger in the men’s 500m at the Olympic Team Trials in December.

On the women’s side, 18-year-old Maame Biney already made history in December as the first black woman to qualify for the short track speedskating U.S. Olympic Team. She won bronze in the women’s 500m at the 2016-17 Short Track Junior World Championship.

Matthew Antoine slides back into Olympic competition after earning bronze in Sochi in 2014 and completing several years of successful international appearances. The Wisconsin-based athlete is looking to get another medal in the Winter Olympic sport this time around. He is joined by contenders John Daly, who took a break from the sport after Sochi.

On the women’s side, Olympian Katie Uhlaender is also trying to beat her fourth-place finish in Sochi.

Though she has been plagued with injuries in recent years, 2013 world champion Sarah Hendrickson is the only member of the 2014 U.S. Olympic Team in ski jumping returning in 2018. She placed 21st in Sochi after she tore her MCL and ACL just months beforehand.

But, if she’s healthy, Team USA anticipates that Hendrickson could be a medal contender in PyeongChang. In a blog post on Team USA’s website, Hendrickson said her training over the summer went well. “There are strengths you gain after fighting so many challenges – the positivity of just being me and the appreciation of having the opportunity to going to an Olympics feel like enough,” she wrote.

Women’s Olympic ski jumping only just debuted in Sochi in 2014.

Olympic medalists including Shaun White have dominated this Winter Olympics sport for Team USA in the past, but one young standout is expected to leave a mark this year.

Chloe Kim, 17, easily secured her spot on Team USA in December. The California-based snowboarder was the first woman to land back-to-back 1080s in a competition last year and sits at the top of world rankings for the sport. She’s a favorite to win gold in the halfpipe event in PyeongChang.

Earlier this year, TIME named Kim one of the 30 Most Influential Teens in 2017.

“It’ll be a good experience to go through such a crazy event with my family,” Kim told TIME. “But at the same time, I’m very worried, ’cause it’s the freaking Olympics. I want to do really good. I’ve got to nail it.”

Correction: The original version of this story misstated the age of Team USA short track speedskating athlete Aaron Tran. He is 21, not 16. 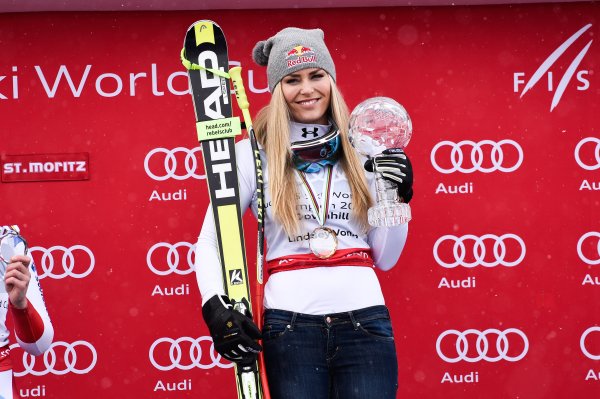 Lindsey Vonn Isn't Carrying a Torch to the Olympics for Trump: 'I Hope to Represent the People of the U.S., Not the President'
Next Up: Editor's Pick