Tuesday’s episode of Jimmy Kimmel Live! was taped before Doug Jones was declared the winner of the Alabama special election. But that didn’t stop Jimmy Kimmel from taking a preemptive victory lap at Roy Moore’s expense.

Kimmel opened his show by taking a number of last-minute shots at the Republican Senate candidate — who started a Twitter war with the late-night host in November — as well as a few of his spokespeople. “I don’t know the results yet, the polls just closed, but I do know Roy Moore shouldn’t even be in the race,” Kimmel said. “And I’m not talking about the Senate race, I mean the human race.”

Of course, when the results of the election came in, Kimmel couldn’t resist getting in one final jab at Moore by sharing the monologue on Twitter. “Goodbye Roy Moore @MooreSenate & the Moore-ons who backed him,” he wrote. 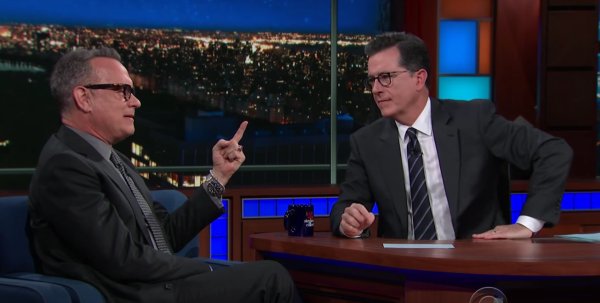 Tom Hanks and Stephen Colbert Arguing Over Decorations Is the Best Holiday Dad Debate
Next Up: Editor's Pick