All the Women Who Have Accused Sen. Al Franken of Sexual Misconduct

After radio host Leeann Tweeden first came forward on Nov. 16 to accuse Sen. Al Franken (D-Minn.) of groping her in 2006, seven other women have made similar allegations against the Democratic lawmaker. In response to Tweeden’s allegations at the time, Franken said he would fully cooperate with a Senate ethics investigation. As more allegations were made public, a spokesperson for Franken said that he “has never intentionally engaged in this kind of conduct.”

Many of his Senate colleagues condemned his behavior, and Republican Sen. Marco Rubio said on Monday that Franken should consider resigning. Franken said that he knows that he “let a lot of people down,” but wants to get back to work.

“I’ve been trying to take responsibility by apologizing. And by apologizing to the people I’ve let down. And I’m going to work to regain their trust. I am going to be accountable,” he said. “I know I let a lot of people down. … Everyone counted on me to be a champion for women.”

The Franken allegations come amid a wave of sexual misconduct allegations against prominent men in public life, as first prompted by the Harvey Weinstein scandal. In the political sphere, former President George H. W. Bush, Democratic Rep. John Conyers, and Republican Alabama Senate candidate Roy Moore have also been accused of sexual misconduct. Bush has apologized, while Conyers and Moore have denied the allegations against them.

Here is a list of Franken’s accusers so far.

The allegations: Tweeden, a radio host, wrote in an essay published on the website for KABC radio in Los Angeles that Franken groped her and kissed her without her consent in 2006 when he was working as a comedian. The two were set to appear in a sketch for a USO show for military members overseas at the time. Tweeden said Franken scripted a kiss into the show. She said that Franken insisted on rehearsing the kiss, and when she refused, he allegedly “put his hand on the back of my head, mashed his lips against mine and aggressively stuck his tongue in my mouth.”

She also alleged that Franken grabbed her breasts while she slept on the flight home. She shared a picture that appears to show the alleged incident.

Franken’s response: Franken initially told reporters: “I certainly don’t remember the rehearsal for the skit in the same way, but I send my sincerest apologies… As to the photo, it was clearly intended to be funny but wasn’t. I shouldn’t have done it.”

He subsequently released a longer statement, which reiterated that he didn’t remember the skit in the same way as Tweeden but admitted that it was “obvious how Leann would feel violated by that picture.” He added that he asked for an ethics investigation on his behavior and said he would fully cooperate.

“The first thing I want to do is apologize: to Leeann, to everyone else who was part of that tour, to everyone who has worked for me, to everyone I represent, and to everyone who counts on me to be an ally and supporter and champion of women. There’s more I want to say, but the first and most important thing – and if it’s the only thing you care to hear, that’s fine – is: I’m sorry,” Franken said in the second statement. “And the truth is, what people think of me in light of this is far less important than what people think of women who continue to come forward to tell their stories. They deserve to be heard and believed. And they deserve to know that I am their ally and supporter. I have let them down and am committed to making it up to them.”

The allegations: Menz told CNN that Franken grabbed her behind during a photo op at the Minnesota State Fair in 2010. Franken was serving as a U.S. Senator at the time of the alleged incident. She said that she had a cordial conversation with Franken, and then her husband took a photo of the two. Menz alleged that Franken “put his hand full-fledged on my rear… It was wrapped tightly around my butt cheek.”

Franken’s response: In a statement to CNN, Franken said: “I take thousands of photos at the state fair surrounded by hundreds of people, and I certainly don’t remember taking this picture. I feel badly that Ms. Menz came away from our interaction feeling disrespected.”

The allegations: Two anonymous women told the Huffington Post that Franken touched their behinds in two separate incidents. The first woman alleged that Franken groped her while they took a photo together at a June 2007 event hosted by the Minnesota Women’s Political Caucus. At the time of the alleged incident, Franken was running for the U.S. Senate.

The second woman claimed that Franken grabbed her behind in 2008 at a Democratic fundraiser. She said that Franken then suggested that the two go to the bathroom together.

Regarding the second woman’s allegations, Franken told Huffington Post: “I can categorically say that I did not proposition anyone to join me in any bathroom.”

The allegations: Kemplin, an Army veteran, told CNN in a story published on Thursday that Franken allegedly groped her in December 2003. She said she was stationed in Kuwait, and she met Franken when he toured with the USO. She said that Franken groped her right breast while the two took a photo.

Franken’s response: A spokesperson for Franken said in a statement: “As Sen. Franken made clear this week, he takes thousands of photos and has met tens of thousands of people and he has never intentionally engaged in this kind of conduct. He remains fully committed to cooperating with the ethics investigation.”

The allegations: The woman told Jezebel that Franken attempted to give her a “wet, open-mouthed kiss” in 2006 at a live taping of Franken’s show at the time, Air America. “I was stunned and incredulous. I felt demeaned. I felt put in my place,” she told Jezebel about the alleged incident.

Franken’s response: Franken has not yet commented on the woman’s claims.

The allegations: The unnamed woman told Politico that Franken tried to forcibly kiss her after the taping of his radio show in 2006 when she was in her mid-20s. She said that the alleged incident occurred once her boss had left the room. When she tried to leave the room, Franken allegedly told her: “It’s my right as an entertainer.’”

Franken’s response: Franken told Politico in a statement: “This allegation is categorically not true and the idea that I would claim this as my right as an entertainer is preposterous. I look forward to fully cooperating with the ongoing ethics committee investigation.”

The allegations: In an essay for the Atlantic, Dupuy alleged that Franken groped her at a Media Matters party during President Barack Obama’s inauguration in 2009. “He immediately put his hand on my waist, grabbing a handful of flesh. I froze. Then he squeezed. At least twice,” Dupuy wrote. “Al Franken’s familiarity was inappropriate and unwanted. It was also quick; he knew exactly what he was doing.”

Franken’s response: Franken has yet to comment on Dupuy’s claims. 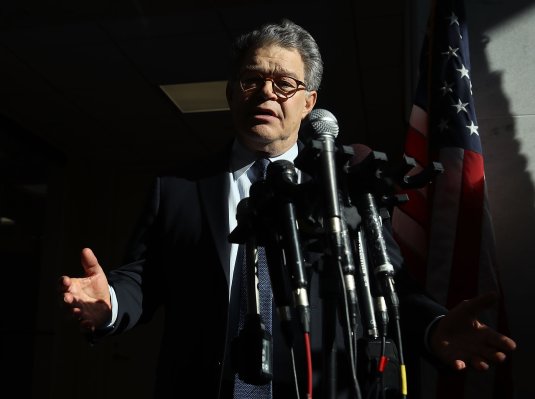