The firing of TODAY Show host Matt Lauer—the second morning-TV host from one of the three major networks, after Charlie Rose, to lose his job this month after his treatment of female colleagues or subordinates came to light—would seem to conclusively end what had been one of the most consequential careers on TV. In a memo, NBC News Chairman Andy Lack said that the network received a “detailed complaint from a colleague about inappropriate sexual behavior in the workplace by Matt Lauer,” adding that the organization has “reason to believe this may not have been an isolated incident.”

For more than 20 years, Lauer had been the constant on NBC’s cash cow news-and-entertainment broadcast. He came in as co-host in January 1997 as the less starry partner to Katie Couric. But as soon as she left in 2006, he was the TODAY Show’s real anchor, the more recognizable and dominant conversation partner to Meredith Vieira, then Ann Curry and most recently Savannah Guthrie.

It wasn’t quite The Matt Lauer Show, but that may have, at times, just been semantic: Lauer got many of the big interviews and his particular wry yet knife-twisting style of interviewing defined the show’s voice. Much of that, given what has been alleged against him, now comes in for re-evaluation—like, for instance, the events surrounding one co-host’s departure. Ann Curry and Lauer were reported not to have gotten along, and Lauer was reported to have been a major factor in her leaving the show in 2012. “It was obvious to [the show’s executive producer] and others that Lauer wasn’t trying hard enough to make it work with Curry because he simply didn’t like her. Off air, Curry and Lauer had no relationship and barely spoke,” New York reported in 2013. “If he stayed, Curry would be gone.” When she announced her departure on-air, Curry openly wept and grimly turned away from Lauer.

The striking and abrupt nature of Curry’s departure, and the reporting tagging Lauer as a key factor, hurt the anchor’s, and his show’s reputation for some time. But through sheer force of persistence—and an able and likable co-host in Guthrie—Today found its way back. But Lauer’s presence on the show raises retrospective questions, too, about the host’s ability to shape the news and perception. Some months after Curry had left, for instance, Lauer interviewed Anne Hathaway, who in her promotion for the film Les Misérables had been shot in a revealing way by an aggressive and predatory paparazzo. “Seen a lot of you lately,” Lauer greeted the actor, before asking “what’s the lesson learned from something like that, other that that you keep smiling, which you’ll always do.” Hathaway responded eloquently about life in “a culture that commodifies sexuality of unwilling participants,” but the stench of the snide joke and odd question remained. It was wildly off-tone, and kicked off a vexed Oscar season in which Hathaway was widely derided and mocked online.

More recently, Lauer came in for justified criticism after a presidential forum he hosted in 2016 saw him repeatedly interrupt candidate Hillary Clinton and pointedly question her judgment and fitness and lob softballs to candidate Donald Trump. “Lauer had turned what should have been a serious discussion into a pointless ambush. What a waste of time,” Clinton wrote in her recent memoir What Happened. And a recent, contentious interview with former child star Corey Feldman about his plans to make specific allegations of sex abuse saw Lauer ask why Feldman was talking to the media instead of “sitting down talking to the police”—a line of questioning that would seem to blame Feldman for being a victim in the wrong way.

Lauer will eventually be replaced—notably, his substitute on the first morning after his firing was Hoda Kotb. But it’s hard to imagine whomever comes in after him amassing quite as much fame or as much seeming ability to question along whatever lines he sees fit—lines that are, now, well worth re-examining critically and carefully. Lauer was on his way to becoming a TV legend; instead, now, he’s just another name on a long list. 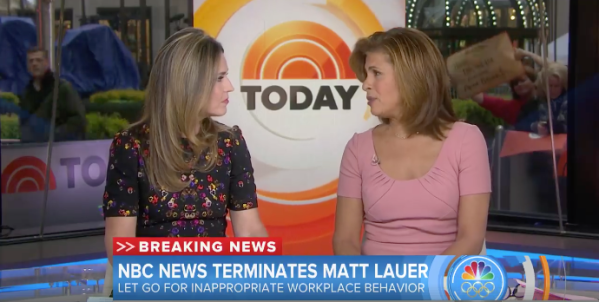 'We Are Heartbroken.' Read Savannah Guthrie and Hoda Kotb's Response to Matt Lauer's Firing
Next Up: Editor's Pick