The revelation came in a lengthy statement on Instagram in response to a flood of criticism surrounding comments she made in the aftermath of teammate Aly Raisman’s tweet denouncing victim-shaming.

Soon after Raisman posted on how victim shaming is wrong, Douglas responded with a now-deleted tweet said that “It is our responsibility as women to dress modestly and be classy. Dressing in a provocative/sexy way entices the wrong crowd.”

Social media backlash immediately followed, and reigning Olympic all-around champion Simone Biles also joined in, tweeting “shocks me that I’m seeing this but it doesn’t surprise me…honestly seeing this bring me to tears bc as your teammate I expected more from you & to support her.”

Douglas issued an apology, hash tagging it #metoo, the tag used for victims of sexual abuse coming forward following revelations that powerful producer Harvey Weinstein sexually harassed multiple women. But Douglas felt the need to explain her comment further. In her latest apology, Douglas alluded to sexual abuse by Nassar. “I didn’t view my comments as victim shaming because I know that no matter what you wear it NEVER gives anyone the right to harass or abuse you. It would be like saying that because of the leotards we wore, it was our fault that we were abused by Larry Nassar. I didn’t publicly share my experiences as well as many other things because for years we were conditioned to stay silent and honestly some things were extremely painful. I wholeheartedly support my teammates for coming forward with what happened to them.”

A representative for Douglas confirmed to TIME that she was a victim of Nassar.

Douglas went on to explain that her initial comments were made after attending an event with children and young adults and that “It’s very humbling when many people look up to you as an example. I take my job as a role model very seriously and I always want to do my best to represent all the best qualities that a role model should embody. I admit there are times that I fall short.”

Douglas makes it clear that she does not support victim-shaming, saying “I understand that many of you didn’t know what I was dealing with, but it is important to me that you at least know this. I do not advocate victim shaming /blaming in any way, shape or form! I will also never support attacking or bullying anyone on social media or anywhere else.”

Nassar was the USA Gymnastics national team doctor for 29 years, and was also employed by Michigan State University. He resigned from USA Gymnastics in 2015 and was fired from MSU in 2016. He is currently in jail awaiting sentencing for federal child pornography charges and faces hundreds of lawsuits by gymnasts and MSU athletes for sexual abuse. 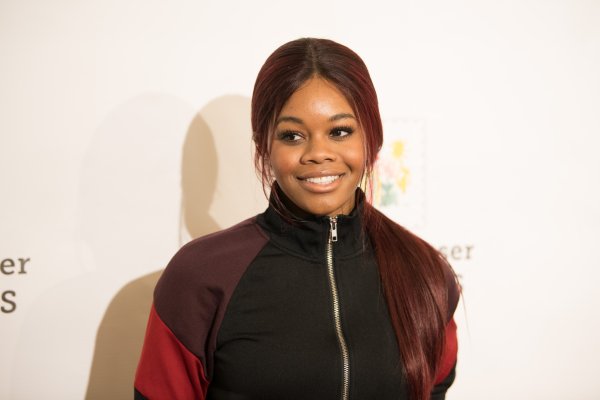