Hillary Clinton: Russia's 2016 Election Meddling Is a 'Form of War'

Hillary Clinton described the Russian campaign to manipulate voters in the 2016 presidential election as cyberwarfare.

In an interview on The Daily Show with Trevor Noah on Wednesday, the former Secretary of State said Russia’s attempt to influence the election is “a form of war” — and she warned that it’s not over.

“Russian trolls and bots and agents are still fomenting discord and conflict within our country. That is classic propaganda, and the Russians are really good at it,” she said. “And I think that’s, in large measure, because the President is so ambivalent. I mean, he has to know — we’ll find out what he knew and how involved he was — but he had to know that people were making outreach to Russians, to the highest levels of the Kremlin, in order to help him, to hurt me, but more importantly to sow this divisiveness.”

When Noah asked her if there was a difference between that and Trump’s possible connections to Russia, Clinton said, “Of course.”

“I think most serious people understand that,” she added, noting the dossier’s release came after the election.

As for why she won’t “go away” now like some of her critics want, Clinton vowed to continue using her platform to represent unsung people she feels need to be heard. “I’m not going anywhere. I walked in the woods, that was enough. I’m done with that, I’m back,” she said. 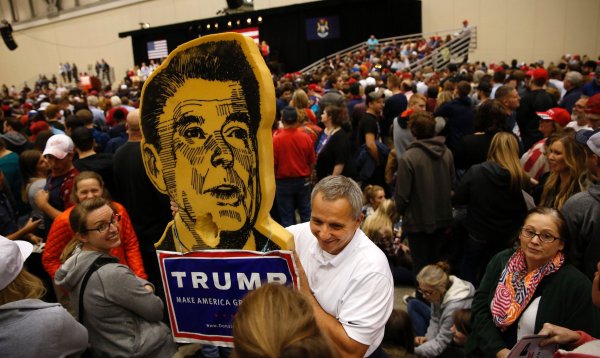 We Worked on Tax Reform Under Reagan. The Republican Plan Is a Corporate Sellout
Next Up: Editor's Pick