A group of U.N. right experts said in a statement that the lack of an effective response strategy has led to an “alarming” situation for the island’s 3.5 million residents.

Signatories also pointed out discrepancies between the U.S. government’s sluggish response to the ongoing emergency, and support provided in the wake of mainland storms.

“We can’t fail to note the dissimilar urgency and priority given to the emergency response in Puerto Rico, compared to the US states affected by hurricanes in recent months,” Leilani Farha, the U.N. Special Rapporteur on the right to housing, said in the statement.

Category 5 Hurricane Irma slammed into Puerto Rico on Sept. 8, decimating the island’s electrical grid. Then Hurricane Maria, one of the top ten most intense hurricanes recorded on the Atlantic, made landfall just over a week later. Maria’s powerful, 155 mph winds wiped out most of the remaining electrical infrastructure.

The financially blighted island — more than half the population lives below the poverty line — had filed for bankruptcy in May.

For the island’s 3.5 million people, post-storm recovery efforts have provided little relief, dogged instead with scandal and claims that the government had acted with relative indifference toward the territory.

Read more: A Land They No Longer Recognize

Six weeks after the second disastrous hurricane struck, one-quarter of Puerto Ricans still do not have access to potable drinking water and thousands remain homeless, according to the Federal Emergency Management Agency.

The U.N. statement said that more than 80% of Puerto Rico’s population, or about 2.8 million people, still lack electricity, while most hospitals are nonfunctioning. After most of the crops were destroyed, many have been left without food.

When President Donald Trump toured the hurricane-struck island earlier this month, he told residents to be glad they hadn’t suffered a “real catastrophe” like 2005’s Hurricane Katrina.

In a widely mocked video, Trump was seen lobbing toilet paper rolls in the direction of Puerto Rico’s hurricane victims.

The U.N. experts said the situation on the island remains “alarming” and called for an urgent “well-resourced emergency response.”

“We call on the United States and Puerto Rican authorities to remove regulatory and financial barriers to reconstruction and recovery,” the statement said. 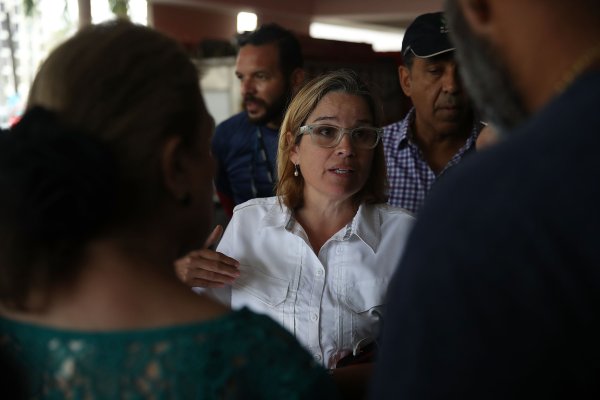 This Energy Company Is In Hot Water After a Trump-Like Twitter Spat With a Puerto Rico Mayor
Next Up: Editor's Pick