Stephen Colbert has some suggestions for President Donald Trump’s official apparel if they want to really take on the full Halloween spirit.

In a video segment shared Wednesday night, the Late Show with Stephen Colbert made pointed updates to the Trump merchandise site. They started off by lampooning the new pumpkin-themed Make America Great Again hats that the site is now hawking for the holiday, at $45 a pop. (They’re actually sold out already online.)

“Buy one and your friends will get a fright realizing you support a man who said there were some good Nazis,” the Colbert piece joked. They also threw in some made-up merch of their own: The “ghastly remains of the dead GOP health care bills” and a “terrifying shrunken head” featuring Attorney General Jeff Sessions, for instance. Finally, as a last-minute costume idea, they suggest dressing up as the “twins from The Shining” in ribbon-belted green dresses — but with the faces of Trump’s two sons.

This is not the first time Trump’s site has gotten into a holiday spirit and decided to sell themed seasonal apparel. For St. Patrick’s Day, they offered a green hat featuring a four-leafed clover instead of a three-leafed clover, which was considered something of a faux pas. 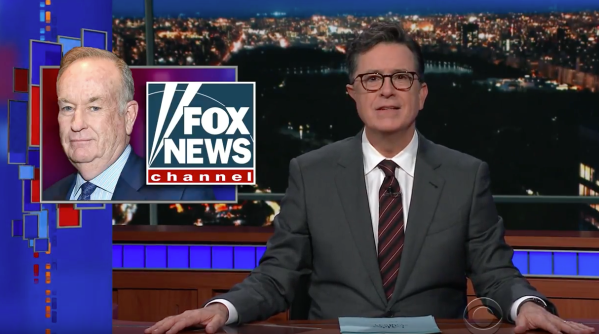 Stephen Colbert Dubs Bill O'Reilly's $32 Million Settlement 'Exactly the Sort of Thing You Do When You’re Innocent'
Next Up: Editor's Pick