Here's Who Was Going to Be Mrs. David S. Pumpkins in That Viral SNL Skit

David S. Pumpkins — played with zany aplomb by Tom Hanks during a Saturday Night Live skit last year — is the viral Halloween character that took the world by storm. And in a new oral history on Vulture documenting the lead-up to the bafflingly funny skit, the comic masterminds behind it explain just how differently it all could have played out.

First off, it was originally written to be much longer. Second, Hanks himself brought in much of the weirdness to the pumpkin-suited character, including his distinctive hand motions and odd way of speaking. And finally, Lady Gaga — the evening’s musical guest — was initially in consideration to make a cameo as “Mrs. David S. Pumpkins,” perhaps in a special witches-themed costume.

“When the doors open and it’s just the skeleton, that was originally gonna be us and Lady Gaga,” writer Bobby Moynihan explained. “She’s wearing a jacket with witches on it. You think she’s gonna say ‘Wanda Witches’ or something, but she goes, ‘I’m Mrs. David Pumpkins.’ Of course his wife would be weird,” co-creator Mikey Day elaborated.

But in the end, Gaga decided to focus on her performance instead of involving herself with the skit.

“She read it and liked it, but it was just a matter of time. Her musical set was pretty involved,” Day noted. Luckily, they still had a hit on their hands.

For a further David S. Pumpkins fix this year, the team created a half-hour cartoon special starring their unusual character. It premieres Oct. 28 on NBC. 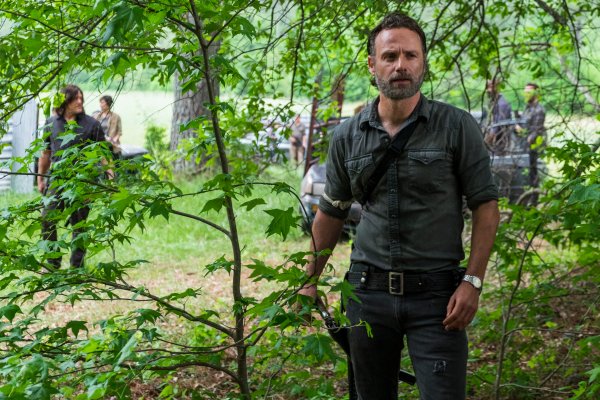 The Walking Dead Kicked Off Season 8 With a Mysterious Flash Forward
Next Up: Editor's Pick