Jimmy Kimmel may spend a considerable amount of time bashing President Donald Trump on his show, but the late night host also would love to have him as a guest on Live! In an interview that aired on Friday’s episode of Good Morning America, Kimmel explained to ABC News’ Amy Robach why he thinks it would be beneficial for Trump to to sit down with him.

“I have a lot of questions for Donald Trump,” he said. “Maybe this is crazy, but I feel like I could turn him around on a couple of things…I think he needs to be surrounded by better people…I just think he’s changed positions so frequently.

Kimmel also commented on his recent Twitter battle with Donald Trump Jr. — a brief back-and-forth in which the First Son lashed out at him over the sexual assault allegations against Harvey Weinstein.

“He’s an idiot, let’s just start with that,” Kimmel said of Trump Jr. “This is an imbecile whose job seems to be tweeting as far as I can tell.” 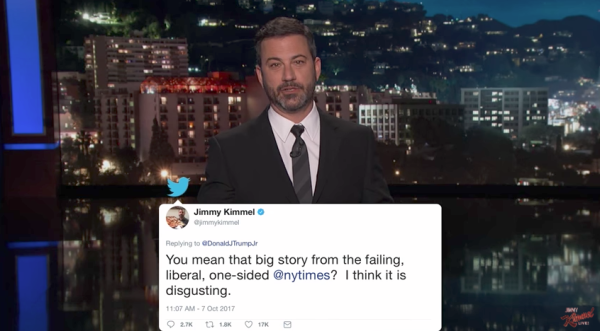