How I Found My Family in Puerto Rico After Hurricane Maria

The view from a helicopter over Toa Alta, a town outside San Juan, Puerto Rico, on Oct. 6, 2017.
Andres Kudacki for TIME
Ideas
By Eliza Castro

Castro is the Photo & Art Coordinator at TIME.

On Sept. 20, Hurricane Maria struck the U.S. territory of Puerto Rico, sending the island into what has been depicted as an apocalyptic state of chaos. With the power grid destroyed and communication cut off, I along with millions of other Americans waited anxiously to hear from family and friends. With the island recovering from the effects of Hurricane Irma that struck two weeks prior, some Puerto Ricans had little time to prepare for the new life-threatening hurricane looming in the Atlantic Ocean. Like my grandparents.

Due to the prior hurricane, they didn’t have access to cable or news until two days before Maria. My grandfather suffers from a condition making it incredibly difficult for him to walk, and my grandmother does not drive, so they had no choice but to brave this storm in their home. The words of Puerto Rican authorities reverberated in my mind: “Evacuate or die.”

As the hurricane plowed through Puerto Rico, the news became increasingly bleak. A flash flood warning had been issued and new images of floodwaters ravaging the streets emerged online. My family and I, safe in New York, eventually learned the eye of the storm was making its way through my grandparents’ neighborhood. I felt my stomach drop to the floor.

With minimal news released from the island immediately following the hurricane, rumors began circulating. I heard my grandparents’ neighborhood was hit with the worst flooding. Inevitably my mind begins to race: What if something happened to my grandparents? Who will help them? What if someone takes advantage of their situation? What if their house flooded? What if they’re dead?

With some areas irreparably damaged and news of scarce resources such as food and water, my fears along with millions of others on the U.S. mainland were becoming reality. I found myself waking up abruptly at 3 a.m. pondering the situation in the Caribbean, unable to fall back asleep.

This disaster opened my eyes to the everyday things I take for granted. I felt guilt for having access to basic resources while many down in the Caribbean lost everything. I could readily drink fresh water. I could shower. I could cook. I could enjoy the comforts of a bed.

The desperate message “HELP” is seen on the lawn of a home near Utuado, Puerto Rico, in early October.
Andres Kudacki for TIME

Lucky for me I work for TIME. When I told my colleagues about my family, they reached out to TIME correspondent Karl Vick, who was on assignment in Puerto Rico. He said he would check on my grandparents. Ten long days passed before we finally heard word from Karl that my grandparents were safe. Their physical home was relatively undamaged, minus some trees and plants. Karl recorded a brief video clip of my grandmother; in the video she said she was “okay.” I was instantly overwhelmed by emotion.

The following Monday I came back into the office to see the smiling faces of my co-workers, who asked details about my grandparents. “You must be so relieved,” my co-workers said. Relieved, yes. Happy? Not quite. I’m fortunate to have had the resources and the support of my colleagues; many people I know are not. We are now going on one month since Hurricane Maria hit the Caribbean and people are still waiting to hear from loved ones.

The hurricane itself may have spared lives, but new stresses are surfacing, such as the dwindling medication supply, something my grandfather is currently dealing with. He ran out of the medication he takes three times a day. Without power, still, he cannot contact his doctor. The clinic where his doctor practices is closed and there are no refills at the pharmacy. He now has to (a) find a way to travel to a hospital (b) likely wait hours to be seen due to the lack of medical professionals and (c) hope they still have the medication he needs. In the case of an emergency in the weeks and months to follow, how will they notify the appropriate authorities?

I choose to remain positive but that does not stop the worrisome thoughts from popping up, especially when I think about the mental and physical anguish of all of those suffering from the devastating effects of Maria, Irma, Harvey and every other disaster in between and after. They are with me every day. My thoughts and hopes now are that we do everything we can for our fellow Americans and international neighbors, and do it relentlessly. They need our help. 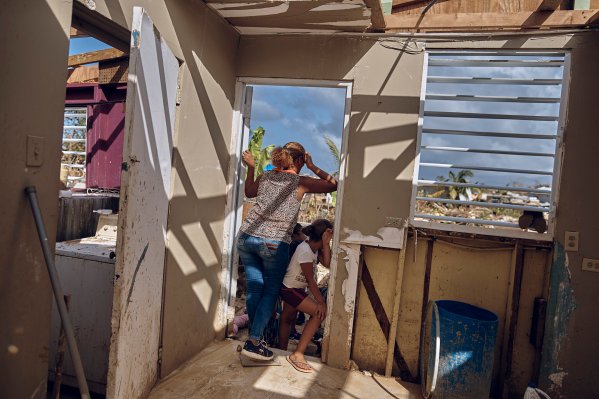 Puerto Rico’s Devastated Electric Grid Could Be a Big Opportunity for Renewable Energy
Next Up: Editor's Pick