You Might See Blue Wine Popping Up on Social Media Soon. Here's What to Know About It.

Fruity on the nose, with a light, candy-forward flavor. Hints of oak and sweet watermelon. Somewhat acidic finish. No, these aren’t the tasting notes of a frozen rosé, or a buttery Chardonnay. It’s blue wine.

Developed by a team of Spanish winemakers, Gik Blue Wine — which comes in a clear glass bottle and is a pure, sapphire hue — is both a gimmick and a new answer to the question of “red or white?”

The distinctive electric color, meanwhile, comes from two pigments, one from the skin of red grapes and one from a plant, Lopez says. So you needn’t be thrown off by the vivid shade. (Or the price: it will sell for an easy-on-the-wallet $11-14 a pop.)

The idea was to “create an easy-to-drink, sweet beverage accessible to all young people between 21 and 90 years old,” one of the creators, Aritz Lopez, explains to TIME. First popping up in the press last year when it became available Europe, the 100% organic wine is finally now making a play for U.S. consumers, who can preorder the unique drink online; Gik expects to begin shipping before the holiday season, and will appear in retail locations scatters across the East, West and South before the year is out.

It’s made of an ever-changing combination of grape varietals from different wineries, Lopez says, including Syrah, Grenache and Macabeo. Lopez says the unorthodox approach “improves both the color and the taste,” and makes every batch “unique.”

But, as Derek Zoolander might say, why blue wine? As a native of Spain’s Basque Country, known for its culinary creativity, Lopez and his team wanted to continue a tradition of innovation with a product that, as he puts it “challenges the rules.” While wine is generally a strictly regulated product with deep history, Lopez decided to subvert the form. Which brings us to its shocking color: the team takes inspiration from the “blue ocean strategy,” an economic theory which calls out markets that are “red oceans” (full of hungry “sharks” gobbling up the small-fry consumers, or “fishes”) and suggests we attempt to create friendlier “blue oceans” (more peaceful places of equanimity).

“It looked like poetry for us to turn a traditionally red beverage into a blue one,” Lopez notes. “Moreover, in psychology, blue means technology, fluidity, future, creativity… concepts to which we feel very related.”

TIME’s taste testers had mixed reactions to the bottle — this frankly isn’t something you’d order at a restaurant to accompany a nice steak dinner or piece of fish — but agreed that it was a “conversation piece” and “something everyone should try.” Most agreed it could work well as a sangria base mixed with soda and fruit, or perhaps in a light cocktail or as an unexpected addition at a theme party. At the very least, it definitely pulls its own weight as Instagram bait. 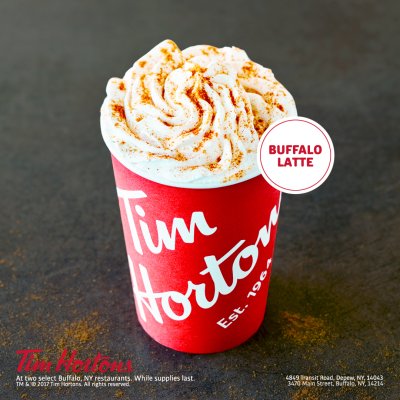 The Buffalo Sauce Latte Is the Zesty Drink One Company Thinks America Deserves
Next Up: Editor's Pick