'The Worst Feeling in the World.' A Mother's Terror During the Las Vegas Shooting

Doris Huser’s memory of the Route 91 Harvest Festival in Las Vegas is a sickening blur, punctuated by perfect, still images: snapshots she will remember for the rest of her life.

There is the image of the woman, her eyes vacant, lying on her back on the pavement in front of Huser: “I’ve been shot,” Huser recalled her saying.

There is the woman whose wheel chair had tipped over in the panic after what would become the deadliest mass shooting in modern U.S. history began. Her body had spilled onto the ground and people were leaping over her, terrified, scrambling for the only exit.

There is the image of Huser’s eight-year-old daughter Cordelia, vomiting uncontrollably into a cowboy hat, a reaction to the trauma, her aquamarine jeans stained black from the asphalt.

But most of all, there is the memory — the mind-bending, stomach-wrenching terror — of losing track of her five-year-son, Aden, and her 25-year-old sister in the chaos that was unleashed when gunman Stephen Paddock killed at least 59 people and injured hundreds more.

“It was the worst feeling in the world,” Huser told TIME. For hours, she couldn’t find them. She couldn’t reach them. She didn’t know if they were alive or dead.

And before all that, before the horror, there was joy.

Read more: These Are the Victims of the Las Vegas Shooting

Huser, 29, who works as a model, loves country music. She had gone to three of the last four Route 91 Harvest Festivals. This time around, her husband Mike, who works in the poker room at the Aria Resort and Casino, had surprised her with tickets for her birthday in September. Huser decided to bring her kids and her sister Samantha Jewell, who has a developmental disability. It was supposed to be a celebration, an adventure, one of those extravagances that help make a life well-lived.

Indeed, Sunday evening started with all the trappings of a good outdoor concert: footlong corn dogs, funnel cake, ribs for Huser and her sister, and Dippin’ Dots for the kids. It was the last day of the three-day festival, and everyone was feeling giddy.

A little after 9 p.m., before country music star Jason Aldean was scheduled to take the stage, Huser and her family claimed a spot in the center of the outdoor venue, in the shadow of the Mandalay Bay Resort and Casino. They put down their food and drinks and set up camp. They wanted a good view, but they didn’t want to be in the thrumming crowd way up close to the stage.

“So then Jason Aldean comes on and we start kind of rocking out, dancing and having a good time,” Huser recalled. “And Cordelia gives me that look: I have to go to the potty.”

Huser told Aden and Samantha they’d be right back, and hustled her daughter over to the Porta Potty area. She figured they’d be gone for five minutes, 10 at the most. But when they made their way back in through the fence, it was too late: A crackling sound, like fireworks, was already filling the air.

“I thought it was strange,” Huser said. “Jason Aldean isn’t the type to have pyrotechnics, and even if he did, it wouldn’t be right at the beginning of the show.” But these weren’t fireworks. Things had gone haywire. People were running at Huser and Cordelia. Hunched, panicked, screaming.

Read more: The Story Behind the Most Haunting Photos From the Las Vegas Shooting

Huser’s stomach sank. She’d left Aden and Samantha alone. Aden is in kindergarten, and Samantha’s abilities are close to those of a nine-year-old. Huser pushed into crowd, against the flow.

Run! Someone yelled at her. Get her out of here! Shouted another, pointing at Cordelia. But Huser wouldn’t turn around.

Soon, the sound of bullets was everywhere. The shuttering, rapid clapping of an automatic weapon, combined with the sound of metal ricocheting off of everything: asphalt, clothing, bodies. It was a hailstorm of bullets.

But Huser didn’t react as she would have expected. “People say that in a war, you get an instinct to stay down, to get cover, but I didn’t have that instinct,” Huser said. “All I had was, ‘I have to find my son. I have to find my sister.'”

Huser held Cordelia’s hand tight and pushed them toward where the bullets were coming from. It was mayhem. There were bodies everywhere. Some had been shot, some were bleeding. Others were lying on top of each other. There were piles of people strewn all over.

Bullets hit the pavement all around them. Hit the canvas concession stands.

Fellow concert-goers clawed at Huser’s boots, grabbed Cordelia by the legs. Get down! they screamed. At some point, someone dragged Huser and Cordelia to the asphalt. Huser doesn’t know who it was. They lay there for a moment, taking stock.

Huser remembers looking up and seeing bright flashes of white light coming from a window in the Mandalay Bay just a few blocks away. The flashes seemed to keep time with the rolling popping of the automatic gunfire. “I stared up at it for a second or two,” she said. “I didn’t put it together at the time, but I was looking right at him. I must have been looking right at him.”

Eventually, she and Cordelia got up and pushed forward again, further into the concert space, closer to where the family had claimed their spot. There was no one there. Aden and Samantha were gone. A man came up behind Huser, grabbed her by the belt, and threw Cordelia over his shoulder like a sack of potatoes.

Run, he told Huser. Run for your life.

Huser ran for the only exit, her legs burning, her heart pounding in her chest. When they got close, the man scooped Cordelia off his shoulder and disappeared. Huser and Cordelia had made it. They were safe.

It was then that Huser lost it. She started screaming. Aden! Samantha! Where had they gone? Had they been shot? Was her little boy alive?

The next several hours played out in a slow-motion nightmare. An Uber driver took Huser and Cordelia, free of charge, to the Aria, where Huser’s husband Mike works, but he was not on shift that night. When news of the attack reached the resort, the whole place was shut down. No one was allowed in or out, and Huser’s cell phone was dead.

There was nothing she could do. She couldn’t call her parents. She couldn’t find her son. Cordelia began vomiting from the stress and trauma. She threw up for more than hour, her tiny body convulsing with fear. At one point, a crowd of revelers who hadn’t yet heard about the tragedy passed by, clapping and laughing.

Meanwhile, across town, a young woman, an everyday angel of some kind, found Aden, alone and terrified. Her name is Lindsey Rogers. She is 26. She had run to a merchandise tent and found the five-year-old boy, who had fallen and been separated from his aunt.

Rogers took a picture of Aden on her phone and posted it to social media: Whose child is this? It was shared 500 times. A few hours later, Huser’s father got a call from Sunrise Hospital, the trauma center nearest the Las Vegas Strip. They had Aden. Another Good Samaritan helped Samantha make it to a nearby Hooter’s. Huser’s father drove down from his house to collect them both.

The next morning, Huser and Cordelia went to Huser’s parents’ house. The gratitude. The enormous gratitude.

But now, Huser warns, the real work begins. Both Cordelia and Aden have experienced significant trauma. “I told them, we’ve been through a war. Now is the time we have to be here for each other,” she said. On Monday night, she scooped them both up before bed. “If you want to cuddle up together, that’s fine. You have to talk to each other, love each other.”

For Cordelia, the problem is loud noises. If anything claps or pops, she bursts into tears. When she goes to sleep, she sees images of death and blood, she feels the terror in her dreams.

For Aden, it’s the fear of being left alone. On Monday afternoon, out of the blue, when the family had gone to the store to buy groceries, Aden stopped in his tracks. Mom, he said, next time let’s all go to the bathroom together.

For Huser, the battle now is to model resilience and strength for her children. “I don’t want them to grow up and be afraid to go to festivals, to go into crowds,” she said. “I know they’ll never be the same as they were on Saturday night. I know seeing something so terrible will be like taking a chunk of their childhoods. But I want them to have no worries. I want them to be fun loving little kids again. That’s my greatest hope.” 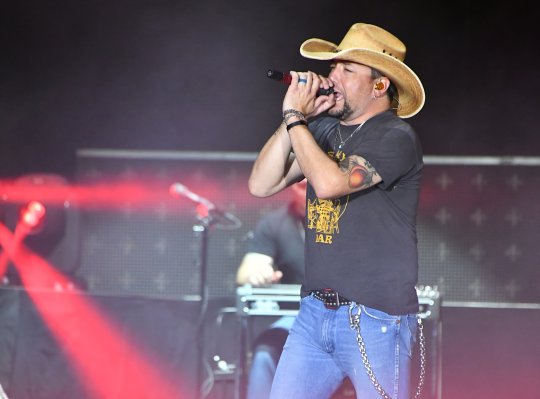 Jason Aldean Has Canceled His Upcoming Shows After the Las Vegas Shooting
Next Up: Editor's Pick