The best lack all conviction

While the worst are full of passionate intensity

For the GOP, especially its Trumpist wing, the moment is piled high with irony. The primary victory of Roy Moore in Alabama over the candidate for the U.S. Senate seat backed by President Trump suggests that that not even Trump himself can control the forces that he unleashed.

Moore’s win is an acid flashback to 2010, when GOP voters in Senate primaries nominated Christine “I am not a witch” O’Donnell in Delaware and the unelectable Sharron Angle in Nevada, who announced a 2018 campaign in March. Republicans had hoped that they had exorcised those characters after that debacle. But years of stoking a sense of perpetual outrage has created a new political dynamic that has given us Roy Moore, a perfect stew of extremism, ignorance and intolerance.

Conservatives who pride themselves on their respect for the constitutional rule of law now find themselves embracing a former judge twice removed from the bench for flouting the law. Moore has suggested criminalizing homosexuality and banning Muslims from political office. The man who may soon be the newest member of the U.S. Senate has suggested that some communities in Illinois and Indiana are under Sharia law. (They aren’t.) Moore backs Trump’s hardline on immigration, but seemed to know little about what and who the Dreamers were. The GOP nominee is an unrepentant “birther” and has suggested that the terrorist attacks on September 11, 2001 were God’s punishment for America’s sins, including “legitimized sodomy.” (Naturally, his candidacy was embraced by Sarah Palin as well as Steve Bannon.)

Do not confuse this with any sort of coherent ideology. Representative Thomas Massie, a Republican for Kentucky, tried to diagnose the mindset of the Tea Party voters when he told the Washington Examiner, “I thought they were voting for libertarian Republicans.” Massie continued, “But after some soul-searching, I realized when they voted for Rand and Ron [Paul] and me in these primaries, they weren’t voting for libertarian ideas. They were voting for the craziest son of a bitch in the race. And Donald Trump won best in class.”

For decades, conservatives have struggled with containing crackpottery, most notably William F. Buckley’s famous excommunication of the John Birch Society in the 1960s. Responsible thought leaders have also pushed back against a variety of paranoid conspiracy theorists, including anti-Semites and the denizens of the fevered swamps who became known as the alt-right.

But in 2016, Trump first emboldened, then empowered those various paranoiacs who until then had only made cameo appearances on the national stage. Now they gleefully crashed the party, overturned the furniture and settled hierarchies as they raucously dismissed traditional gatekeepers. Those who were slow to join the bacchanal were denounced as sellouts and traitors or, perhaps worse, dismissed as elitists, as have George Will and the editors of the venerable National Review magazine. This breakneck transition required extraordinary nimbleness: Conservatives who had just five minutes earlier agreed that Russia posed a global threat, pivoted to embrace Vladimir Putin as an exemplar of white Christian civilization; Tea Party activists who had railed against deficit spending accepted calls for massive stimulus spending the party of free markets endorsed protectionism and an economic policy that seemed driven by personal fear and favor; constitutionalists watched silently as the rule of law was undermined and norms of public integrity were ignored.

Trump rode that wave, imagining that he could control it. In his boundless self-regard, he thought that the electorate’s giant middle finger was intended as a salute to his awesome powers of personal leadership. No wonder he is so angry with his defeat that he is actually deleting tweets that had supported Moore’s opponent, Luther Strange.

It turns out that many of the Trump voters who had said they wanted to burn it all down meant it, and they are taking to the task with great relish. The result, the punditocracy declares, will be a full-out civil war in GOP. But it’s actually worse, quite a bit worse.

While Trump continues to gratuitously stoke culture wars by attacking the NFL, the GOP’s invertebrate dysfunction continues to be on full display. Even as Trump lashes out at his critics and pours kerosene on the nation’s racial divisions, feckless congressional leaders continue to try to appease him. (On Wednesday, Speaker Paul Ryan gushed to Sean Hannity that he is “very happy” with Trump’s presidency and that he is “giving us the kind of leadership to get this country back on the right track.”) So far, no prominent Republican officeholder has refused to back Moore’s candidacy or been willing to point out its toxicity for the future of the GOP.

In the meantime, despite Trump’s abortive and overhyped deal with “Chuck and Nancy,” Republicans seem to have given up on talking to voters outside of their own echo chamber. Instead, the party is locked in an endless feedback loop as it tries with diminishing success to placate its most bombastic voices. The most obvious consequence is their inability (so far) to legislate. But in the longer term, we are seeing the crack-up of one of the nation’s two major political parties. 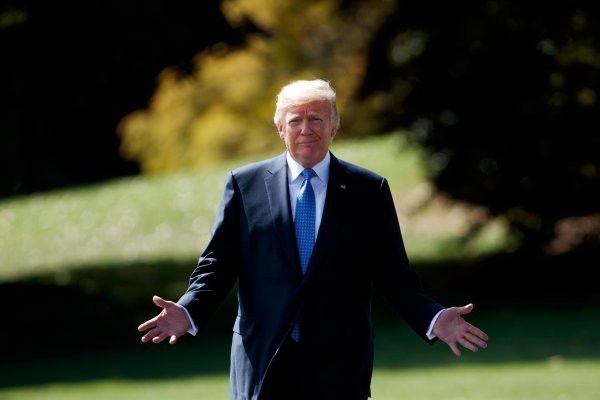 Deepak Chopra: What to Say When Your Coworker Wants to Talk Politics
Next Up: Editor's Pick