DNC CEO: How Democrats Are Building for State Wins

Over the last few months, we’ve seen Democrats united against the attacks on our values. We stopped Republicans’ attempts to take away health care from millions; we’ve pushed back against this administration’s hatred and bigotry; and we’ve kept President Trump from advancing much of his disastrous agenda. But what you may not have noticed is that Democrats have also been notching victories at the ballot box.

There’s no sugarcoating where we found ourselves after November. We didn’t just lose the presidential election; we had been losing elections up and down the ballot for nearly a decade. That’s why we’re changing things. And we’re doing it the right way – from the ground up.

Back in May, Democrat Christine Pellegrino won a New York state legislature seat by 16 points in a district Trump won handily last November. In July, a Democrat won a New Hampshire state Senate special election for the first time in 33 years, beating a well-known, well-funded Republican and substantially outpacing our 2016 performance in the district.

In August, a Democratic candidate for the Iowa State House won by 10 points in the same district Trump won by 21 back in November. And earlier this week in Oklahoma and New Hampshire, Democrats won two more seats that Trump carried by 11 and 16 points, respectively. Even in elections where we’ve come up short, we’ve seen huge swings in our favor in deep-red districts.

All across the country, the American people are sending a loud and clear message: Donald Trump and the Republican Party do not stand for our values.

Democrats everywhere have been inspired to not only make their voices heard at the ballot box in special elections, but to step up and put their names on the ballot. Our slate of candidates running in 2017 legislative special elections has been strong, diverse, and filled with new faces. In the upcoming Virginia House of Delegates elections, Democrats have stepped up to run in more districts than ever – 88 out of 100.

These local leaders are fighting on the front lines to stop the spread of Trumpism into their communities and they are championing local issues important to their neighbors. From highlighting the need for a fully-funded public education system in Oklahoma, to pushing for healthcare access in rural communities in Iowa, state Democrats are working to build a foundation of progressive action in statehouses nationwide – and they are winning.

But we didn’t just win these seats because we had the best policies. We also had the best organizing. We’ve made investments in our state parties and grassroots organizers that have paid off at the ballot box. And we have keep that momentum going.

While federal elections can sometimes eclipse local campaigns, winning back state legislative seats is essential. They’re necessary to make change for Americans at a local level, and they’re necessary in the coming years to ensure that our elected leaders represent the diversity that makes our country so great. With crucial 2020 redistricting on the horizon, the time to act is now.

And this is just the beginning. We have big challenges ahead, but with smart investments and good organizing, we’re poised to come roaring back. There’s an enormous appetite for new leadership in America, and it’s growing by the day. And that means there’s never been a more important time for Democrats to stand united.

From protecting people’s health care and retirement security to fighting bigotry and hatred, the values of the Democratic Party are the values of the American people. And the best way to defend those values is to create a groundswell of Democratic victories from Washington state toVirginia. 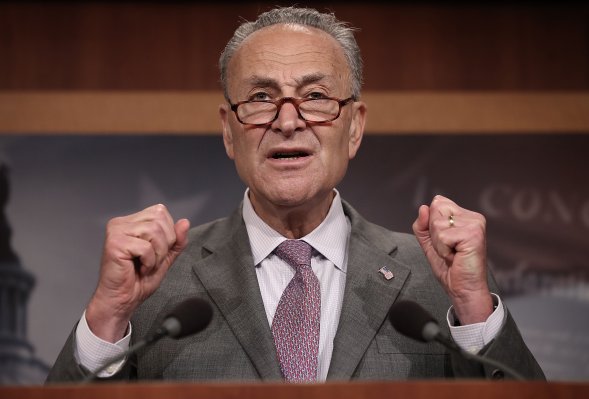 Democrats Say Citizens United Should Die. Here’s Why That Won’t Happen
Next Up: Editor's Pick