Why Is President Trump Making a Deal With Democrats? He Just Wants a Win

President Trump may finally be putting his deal-making skills to work in Washington.

Over a Chinese food dinner in the Blue Room of the Executive Mansion, Trump seemed to reach an agreement in principle with Senate Minority Leader Chuck Schumer and House Minority Leader Nancy Pelosi that would preserve the Deferred Action for Childhood Arrivals program.

A week after cutting a deal with the two Democrats to raise the debt limit while funding hurricane relief, Trump once again reached across the aisle—cutting out Republican congressional leaders in the process.

It’s unclear whether the deal to protect Dreamers will be consummated or how long Trump’s outreach to Democrats will last. As Democrats celebrated, the White House walked back the idea that an agreement had been reached, and the President’s tweets provided little clarity. While the rumored agreement fits the broad outlines of what lawmakers on Capitol Hill are thinking, the deal will hinge on its details.

What’s clear is that days after Trump announced he would rescind DACA with a six-month sunset period, the President is still wrestling with his decision to end the widely popular Obama-era executive action, which threatened to become a political albatross for him and Republicans writ large. Wednesday night’s dinner was advertised as an opportunity to begin talks on congressional action to protect roughly 800,000 people brought to the U.S. illegally as children. And yet Democrats walked out stating Trump had agreed to pair the DACA fix with additional border security funding.

The White House, which had provided its own bland readout of the dinner, found itself under fire from the GOP base, which opposes action on DACA, and from GOP lawmakers who felt blindsided for the second time in a week.

The move highlighted Trump’s growing frustration with Senate Majority Leader Mitch McConnell and Speaker of the House Paul Ryan, whose failure to replace the Affordable Care Act and criticism of Trump’s Charlottesville comments incensed the President. Until now, Trump has depended almost solely on congressional Republicans to implement his agenda. Aides said his newfound embrace of Democrats—even if fleeting—was the President’s warning to his party that he is willing to find new friends.

White House officials argued there was no deal and that Trump did not, as Democrats said, agree to remove border wall funding from consideration as part of a DACA fix. In tweets Thursday morning, Trump said there was no final deal, yet defended the outlines of what he and the Democratic leaders are pursuing.

“Does anybody really want to throw out good, educated and accomplished young people who have jobs, some serving in the military,” Trump tweeted. “Really! They have been in our country for many years through no fault of their own – brought in by parents at young age. Plus BIG border security.”

As Trump traveled to Florida to tour damage from Hurricane Irma, he muddied the waters even further. An aide told reporters aboard Air Force One that Trump was open to considering a path to citizenship for the DACA recipients. The President said moments later that he was not—and would not be open to “amnesty,” the politically charged term his base uses in criticizing efforts to provide legal status to those in the U.S. illegally. Trump also said he wants an “understanding” on building the border wall with Democrats, “otherwise we’re not doing any deal.”

The head-spinning 14 hours highlights the tensions within the White House and between the President and his party. Trump has pinned his hopes on an enthusiastic base that was willing to tolerate his unorthodox policies and norm-shattering transgressions. A Republican by convenience, Trump holds few core ideological beliefs. Some moderate aides have tried to pull him back to the center on issues like DACA, while his cadre of nationalist advisers pushed for him to end the program.

Instead of ideology, Trump is often driven by the pursuit of public affirmation. The criticism he faced over the DACA recision caught him by surprise, leading him to publicly encourage Congress to come up with a fix. Now, as his base objects to the outcome of Wednesday’s dinner, Trump is at least rhetorically backing away so as not to alienate his core supporters.

With healthcare reform undone and the prospects of tax cuts by the end of the year still daunting, Trump’s overarching concern is finding a “win” for his beleaguered agenda. The President has tended to care little about whom he cuts a deal with or what it contains—just that he can proclaim victory. 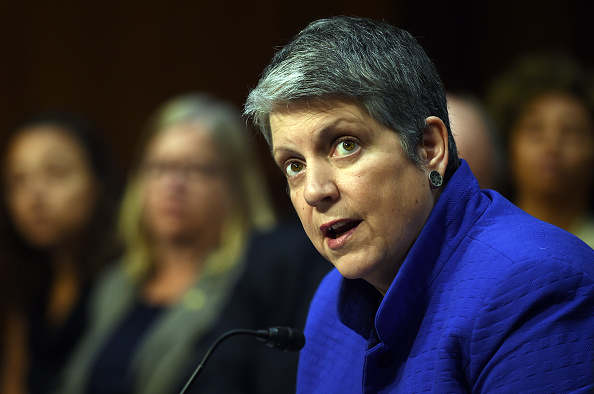 Janet Napolitano Sues Her Former Agency to Try to Save DACA
Next Up: Editor's Pick