While the fashion industry has made more of an effort towards inclusion in recent years, that doesn’t mean that there still isn’t ample room for improvement, a sentiment that was shared candidly by Nicki Minaj during Phillip Plein’s Spring/Summer 2018 runway show on Saturday night at New York Fashion Week.

The “No Frauds” rapper, who performed at the after-party for Plein, took designers and the industry at whole to task for benefitting from black culture without valuing or including the communities where it originated.

“Thank you, Philipp Plein, for including our culture,” Minaj said. “Designers get really big and really rich off of our culture, and then you don’t see a motherf–ker that look anything like us in the front row half the time. So let’s make some noise for Philipp Plein tonight.”

Along with Minaj, Future, Rae Sremmurd, Yo Gotti, and 21 Savage, also performed at the runway show that opened with a Dita Von Teese striptease and ended with the dancing talents of “Fade” star and Kanye protegeé Teyana Taylor. This isn’t the first time that Plein’s show has generated buzz off-the-runway either; at his show last season, tongues wagged when Whoopi Goldberg offered to sit nest to Tiffany Trump after editors refused. 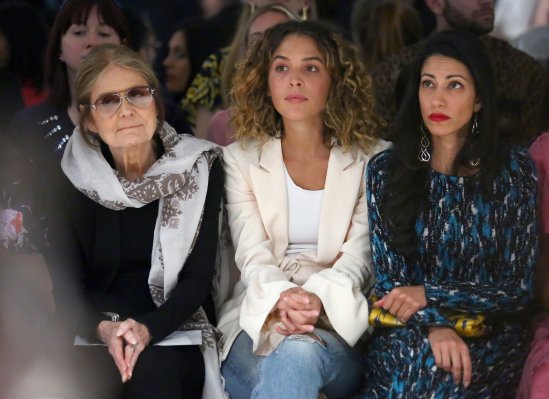 Gloria Steinem Attended Her First Fashion Show Ever With Huma Abedin
Next Up: Editor's Pick