Katy Perry doesn’t do understated. So for the final act of Sunday night’s stacked roster of live performances, Perry and Nicki Minaj blew up the basketball metaphor on their song “Swish Swish” to epic, larger-than-life proportions.

Starting out standing tall atop a giant, bedazzled basketball and watched over by an oversized human hand, Perry and her cohort of dancers — with nets across their faces — went all-in on the game-time theme of the song off of Perry’s Witness album. (The official music video for the track, also heavy on the basketball, just came out last week.)

Perry eventually descended from her perch thanks to a rope hoist before joining in on the choreography. Minaj, of course, also made an appearance: this time, as a rapping referee of sorts in a black-and-white-striped costume, which was quite a switch-up from her earlier Barbie pink latex get-up. 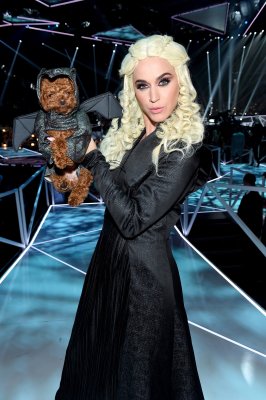 Here's How Katy Perry Summed Up the New Taylor Swift
Next Up: Editor's Pick