Romance has been in the air in season seven of Game of Thrones, with sparks flying between Grey Worm and Missandei, Yara and Ellaria, and — at least according to him — Tormund and Brienne. But the relationship at the heart of the story has undoubtedly been the budding connection between Jon Snow and Daenerys Targaryen.

Following Jon’s arrival at Dragonstone in episode three, the two slowly grew to respect one another as they learned more about each other’s pasts and ambitions. By the time Jon departed for his mission beyond the Wall, it was clear their feelings had developed into something deeper. And in the closing minutes of Sunday’s episode, they acted on those feelings.

Following the revelation that Jon’s — or should we say Aegon’s — father was Rhaegar Targaryen, the pair was shown consumating their relationship on one of Daenerys’ ships.

Unfortunately, Jon and Dany are both still unaware that they related — a long-held suspicion by fans that was confirmed by flashbacks to Rhaegar’s marriage to Lyanna Stark and Jon’s subsequent birth.

Rhaegar was Daenerys’ older brother, which makes her Jon’s aunt. However, the Targaryens have a long history of incest, having spent over 300 years wedding brothers to sisters to keep their bloodline pure. And while sexual relationships between immediate family members (siblings, parents, offspring) are now deeply frowned upon by Westerosi society, those between more distant relations — such as first cousins — are not considered incest.

On the other hand, leading up to season seven, Kit Harington — who plays Jon — told Entertainment Tonight that the King in the North is “probably the least up for incest” of all the show’s characters.

As the trueborn son of Rhaegar — who was the Mad King’s heir — Jon technically has a stronger claim to the Iron Throne than Daenerys. But considering Jon has never expressed a desire to rule the Seven Kingdoms, it doesn’t seem likely he will challenge her ascension. However, despite Dany’s belief that she can’t have children, their relationship could solve the problem of who will inherit the realm when the Great War comes to an end — if there’s anything left to inherit, that is. 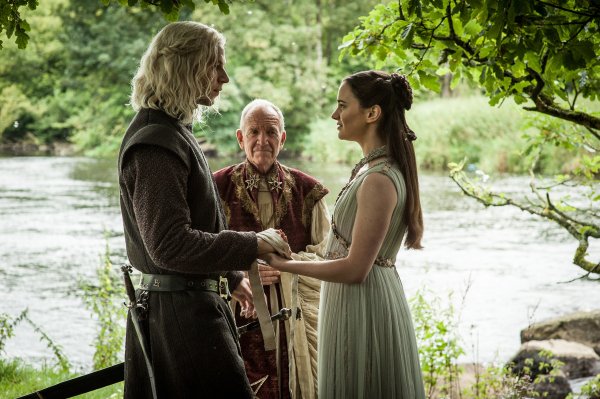 Game of Thrones Just Dropped a Major Bombshell About Jon Snow's Parents
Next Up: Editor's Pick