How to Prepare for Hurricane Harvey

As Hurricane Harvey inches closer to making landfall, Texans are preparing for the storm’s impact. Here’s what you need to do if you’ll be affected.

Depending on where you are and if you’ll need to evacuate or not, there are different ways you might need to prepare. Anyone near where Harvey may impact should monitor alerts for any changes in the forecast and to see if their plans should change.

How to prepare for Hurricane Harvey

The first thing anyone in one of the seven counties along the Gulf of Mexico coast with an evacuation order should do is leave. Four of those counties have ordered the entire county to evacuate and said they cannot guarantee anyone who stays behind can be rescued, the Associated Press reported.

Airbnb is trying to help evacuees by waiving service fees and working to pair evacuated people with hosts who are willing to let them stay for free. Anyone who needs to leave should have a route mapped out and a bag with a disaster supply kit, Ready.gov advises.

A state of disaster has also been declared in 30 counties. Anyone in an area considered a state of disaster, who is not evacuating, should have supplies in case they lose power and water for several days and cannot leave due to blocked or flooded roads, according to Ready.gov.

Securing loose rain gutters and downspouts and clearing clogged areas can also reduce the risk of water damage to your property.

An emergency kit should include food and water for at least three days, any medication needed, pet supplies if needed, a whistle to call for help, important documents and ID, things to stay entertained without electricity, a flashlight, batteries, cash and first aid supplies, according to Ready.gov. The gas tank in your car should also be filled and should have extra emergency supplies and spare clothes in case you need to leave in a rush.

Refrigerators should also be kept on the coldest setting and should be opened as little as possible. Ready.gov notes that this will keep food cold for longer in case the power goes out.

Where to check for emergency alerts

The National Weather Service is also sending out alerts on Twitter at @NWS. Keeping a charged portable charger for a cell phone can help if power goes out and if watching television or listening to the radio is no longer an option. 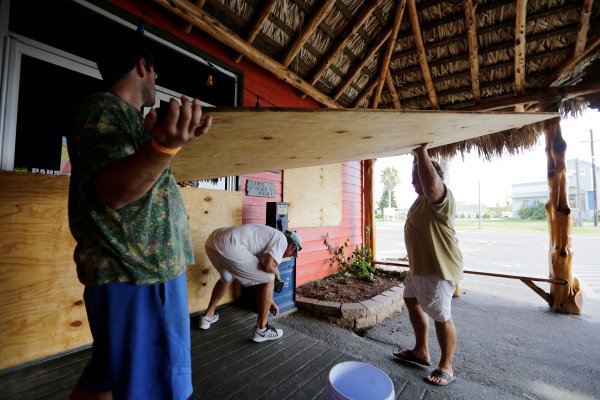 This Is Hurricane Harvey's Path and Forecast
Next Up: Editor's Pick