Steve Bannon Is a Lot Like Donald Trump. That's Why He Was Fired

Steve Bannon knew what was coming. He was ready. First, though, he was going to have one last lunch from the cafeteria under the West Wing.

President Trump was in the Catoctin Mountains at a summit to consider the United States’ strategy toward Asia. So were the Vice President and the rest of the national security team, a fraternity from which he had been blackballed earlier this year. John Kelly, Trump’s new chief of staff, gave the final sign-off for the firing before joining the session at Camp David.

So Bannon, the fiery anti-globalist who prided himself of being a disruptive force inside the White House, was grabbing lunch in the Navy Mess. He had preemptively told his allies that he had actually resigned on Aug. 7, and they were ready to repeat that to all askers. The headline on the influential Drudge Report announced Bannon was “moving on after an impressive run.” Bannon’s former website, the alt-right favorite Breitbart News, bannered the departure with a warning that “Bannon the Barbarian” would soon turn his legions of supporters on this White House. Brietbart’s editor, Joel Pollack, tweeted a one-word threat: “#WAR.” The site confirmed on Friday evening that Bannon had returned as Executive Chairman.

Thus ended Bannon’s one year with Donald J. Trump, not with an embarrassing march with a box of personal items, but with a threat delivered through his proxies. Such moxie is exactly why Bannon could not win with this White House: he is not one to cede the stage, the spotlight, the megaphone to Trump, and Trump has never learned to share.

“This is exactly why cutting Steve loose was going to be so risky,” said one former White House aide to Trump. “You couldn’t exactly control him before. But now? He’s a host unto himself.” (That observation is a paraphrase from Hamilton, the Broadway show about another fiery media personality who, “as long as he can hold a pen, he’s a threat,” continues the lyric.)

The White House issued a two-sentence confirmation that Friday would be Bannon’s last day. Even the disclosure of Bannon’s exit was typically chaotic. As President Trump was at Camp David to meet with his national security team, reports starting to leak that Bannon was on his way out the door. No longer would be the focus be a national security strategy that is at best incomplete; yet another dramatic Friday human resources remake would lead news coverage.

White House aides loyal to Bannon furiously spun their tales that Bannon had resigned on his own 10 days earlier. (This, of course, required those who were on the other end of the call to set aside assurances some of the same aides gave all week that Bannon had been telling colleagues he felt safe in his job, even as he gave incendiary interviews.)

In the new version of these facts, top staffers were still trying to figure out how to announce Bannon’s exit when violence from white nationalists unfolded in Charlottesville, Virginia, beginning on the evening of Aug. 11. The White House decided to delay the announcement, lest it look like the President was seeking distance from Bannon. In the White House spin, the counter-protesters were the ones who delayed Bannon’s exit.

Even so, Bannon’s previously unrepentant support for the alt-right immediately made him part of the story unfolding in Charlottesville—perhaps a bigger one than the President and his seeming inability to condemn white nationalists. After all, Breitbart had published no shortage of vile content and cheered on the white nationalists who were now marching in the streets with clubs, firearms, pepper spray and racist chants. Trump merely asked them for their votes.

When the President met with reporters for a confrontational press conference in the Midtown lobby of Trump Tower, he declined to give a full-throated defense of his chief strategist. “We’ll see what happens with Mr. Bannon,” Trump said on Aug. 15—a full week after Bannon allies said he had tendered his resignation.

But there were signs that Bannon’s tenure was limited. Attacks on national security adviser H.R. McMaster were suspected to have started with Bannon’s corner of the West Wing. Dismissed communications director Anthony Scaramucci hinted Bannon was on his way out. McMaster declined to defend him during Sunday show visits, too.

Some in Trump’s orbit had argued for making Bannon the fall guy for President’s botched initial response to Charlottesville, which blamed “many sides” for the violence in Virginia. Yet louder voices opposed it, arguing the White House couldn’t afford to “betray” the very vocal minority of voices who believed Trump would help them enact an agenda that abandoned political correctness for 1950s-style rhetoric. They also worried what Bannon might do next if he felt thrown to the wolves.

The debate bought Bannon a few more days. But calls grew louder for Trump to purge his administration of those who had given platforms to voices similar to the ones chanting racist and anti-Semitic slogans on a Virginia campus founded by Thomas Jefferson. Trump did Bannon no favors by lashing out during a hasty press conference, seeming to give voice to the racial chants coming from the alt-right.

The moment captivated a nation, and threatened Trump’s presidency. Vice President Mike Pence flew home early from a trip to South America. At least three White House advisory boards have ended as a result and some Cabinet members eyed the doors.

By Friday morning, 2012 Republican nominee Mitt Romney was adding his to the list of names calling on Trump to re-evaluate his presidency and the support it receives from racist corners. “Once and for all,” Romney wrote of Trump, “he must definitely repudiate the support of David Duke and his ilk and call for every American to banish racists and haters from any and every association.”

It likely wasn’t Romney who pushed Trump to finally can Bannon, but rather the growing sense that his ouster was inevitable. “Steve knew he was on the outs,” one ally said.

One senior member of the Republican Party says Bannon’s fate was sealed the day Kelly was named the new White House chief of staff on July 28. Kelly, a retired Marine Corps General, likes order and discipline. Bannon favors division and chaos—just look at the brand of deeply cutting attacks Breitbart launched during Bannon’s tenure as its chief.

“It took General Kelly a while to figure out who was doing what. It quickly was clear Steve that was leaving,” says this Republican, who has worked with GOP White Houses dating to the 1970s and has friends in senior roles in Trump’s building. “There’s a reason why Steve could leave right away. He didn’t have anything to turn over to anyone else. He wasn’t really doing anything but pushing his own agenda.”

Bannon was never an obvious fit for the Trump orbit. Yes, they shared a distrust of the elites: Bannon was an odd fit during his days at Goldman Sachs, while Trump never was fully embraced by Manhattan’s upper crust.

At times, it didn’t seem like Bannon wanted to be part of the Trump klatsch at all. Consider this week, when he gave an interview to the liberal magazine, The American Prospect. At first, it seemed that his unfiltered comments were an accident, then Bannon said he intentionally used fiery language to draw attention away from the President’s own blunders. All of this, it should be noted, came after Bannon allies now say he had already resigned.

Yet there are signs that Bannon seldom loses without taking a scalp with him.

When Bannon met with reporters in May of last year, he was a pitching a harsh anti-Hillary Clinton film that he hoped would throw a wrench into the Democratic Party and further divide the Clinton backers from the die-hard supporters of Bernie Sanders. Distrust, the conservative provocateur suggested that night in a Manhattan screening room, would breed chaos would breed depressed Democratic voters. “We want this to go out to as many people as possible,” Bannon told a handful of reporters gathered for a private showing.

On its own, “Clinton Cash” didn’t derail Clinton’s nomination in Philadelphia two months later. But Bannon was yet again showing his skills as a man who can read America’s moods—often the private ones most people do their best to conceal in polite company. He saw a frustration among voters who felt they weren’t getting the breaks they thought they were owed and an opening to help those individuals find villains who were blocking them: elitists, globalists, minorities, immigrants, in the country illegally or not. They were themes he would build upon in the White House.

A few blocks west, over on Fifth Avenue, then-candidate Donald Trump had been watching Bannon and his staff at Breitbart News rile up millions of readers every day with that very vilification he was using in his campaign. By the time Bannon was mingling with reporters in that over-air-conditioned screening room, Trump had locked the Republican Party’s nomination and was looking ahead to the fall campaign. Some were arguing that what worked to attract fervent members of the party base wouldn’t work in a head-to-head election against Clinton, who had yet to lock down her nomination.

Instead of moderating, as some in Trump’s orbit at that time urged, the New Yorker decided he wanted to keep running as he had. He tepidly said he could control himself, but would revert if he weren’t having fun. Clearly, he meant to stay true to what helped him win. He brought into the campaign Bannon, who was chairman of Breitbart, the self-described home of the alt-right. Trump was running to be their President. By August, Bannon was a full-time consigliere to Trump, feeding his instinct to punch hard, troll deep and show no mercy.

A year later, Bannon was packing his first-floor office in the West Wing. His allies tried to pitch it as a one-year anniversary of taking a seat on the Trump train. Other allies said he would be more effective at pushing the President’s agenda from outside of government, where there arguably would be less scrutiny.

No one left in the West Wing was buying that. But Bannon’s adversaries did take some solace: if Trump wanted to read the latest alt-right provocations, he would have to look at his Twitter account, not walk down the southernmost hallway of the West Wing. 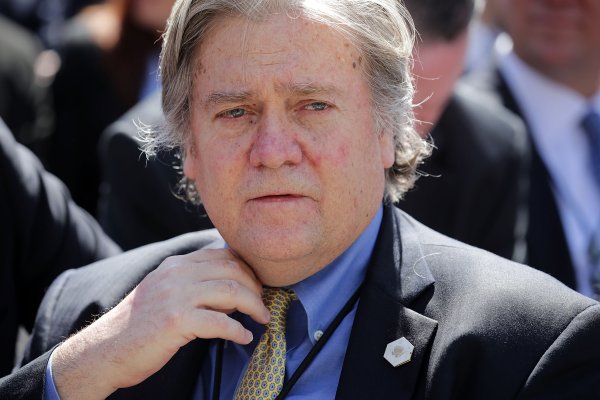 Steve Bannon Is Officially Back at Breitbart
Next Up: Editor's Pick