Stephen Colbert to Trump: 'You Showed Us Who You Were'

On Wednesday, Stephen Colbert used his nightly show monologue to outline the nation’s current state of affairs regarding President Trump, walking through the president’s widely criticized statements on the violent events in Charlottesville, Virginia — and the responses from Republican lawmakers, right-wing nationalists, and others to his rhetoric.

“You know it was the right thing to say because he hated saying it,” Colbert added.

But that wasn’t the end of it. Trump then turned a Tuesday press conference into an opportunity to opine further on the attendees of the Charlottesville rally, saying that there was “blame on both sides.” This more recent take riled the nation, as Colbert noted. “Everywhere in this country, people were horrified. North, south, Republican, Democrat, top, bottom, sweet, sour. But you know who loved what Donald Trump said? Donald Trump.”

He also compared Trump to the embarrassingly out-of-touch relative that some families have to deal with. “Please, Grandpa, you can’t say this stuff out loud in the restaurant, OK! That’s fishing boat talk, OK!” he jokingly implored. 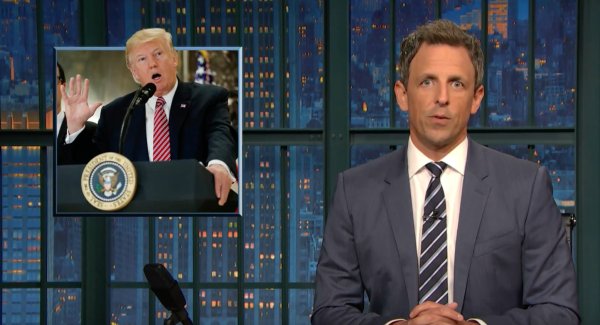