In her never-ending quest to claim the Seven Kingdoms and the Iron Throne, Daenerys Stormborn of the House Targaryen, first of her name, the Unburnt, Queen of the Andals and the First Men, Khaleesi of the Great Grass Sea, Breaker of Chains, and the Mother of Dragons, is fairly adamant about one thing: she needs everyone she meets to “bend the knee,” including but not limited to one Jon Snow, the King of the North.

Most of the interactions that Jon and Daeny have had in season 7 of Game of Thrones since they first met have begun or ended with the Mother of Dragons asking Jon Snow if he will “bend the knee,” something that isn’t lost on fans of the show (including cast member Sophie Turner) who have taken to the Internet with endless jokes about how Daenerys just can’t let this power play go.

There was the perfect meme for Jon and Daeny’s never-ending topic of conversation.

Viral photos of Jon and Daenerys on their phones came in handy as an appropriate rejoinder for “bending the knee.”

While others found a GIF that the Mother of Dragons would love.

Even Sansa Stark got in on the fun.

Others had the perfect soundtrack for Daenerys’ demands.

While others pointed to the Tarleys’ demises as impetus for bending the knee. 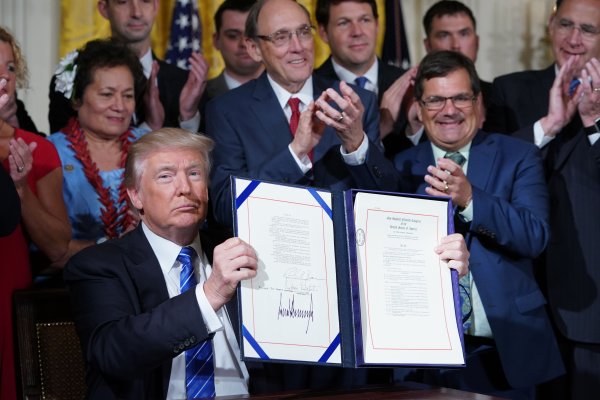 The Internet's Best Memes of Politicians Holding Signs
Next Up: Editor's Pick