After nearly 48 hours of silence and in the face of bipartisan criticism, President Trump condemned the racist violence this weekend in Charlottesville, Va., which claimed the life of one civil rights activist and two law enforcement officers. Trump, who had spoken out against violence on “many sides” on Saturday, finally took aim that the white supremacist, neo-Nazi, and KKK elements. There was no public explanation for Trump’s delayed response, which drew fire from both Democrats and Republicans. At very least, Trump’s delayed condemnation was a sign of how he’s never missed an opportunity to miss an opportunity to emerge as a national leader. He’s consistently chosen the path of greatest resistance when it comes to issues of race, religion, and ethnic strife. Until Monday, Trump had made explicit harsher words for Senate Republicans and the CEO who abandoned his manufacturing council in protest of the president’s silence, than the extremist groups. Many in both parties saw it as fitting into a pattern for the president, who has proven to be swift in condemning attacks by racial and religious minorities, but has only reluctantly weighed in when they’re the targets of the aggression.

Trump Chips Away at Postcrisis Wall Street Rules
Plan to restrict bonuses has been dropped, and some limits on banks’ trading are under review [Wall Street Journal]

“We condemn in the strongest possible terms this egregious display of hatred, bigotry and violence on many sides, on many sides.” — President Trump on Saturday.

“Racism is evil. And those who cause violence in its name are criminals and thugs, including the KKK, neo-Nazis, white supremacists, and other hate groups that are repugnant to everything we hold dear as Americans.” — Trump on Monday after days of backlash

‘This Is un-American.’ Politicians on Both Sides of the Aisle Rebuke Charlottesville Violence [TIME] 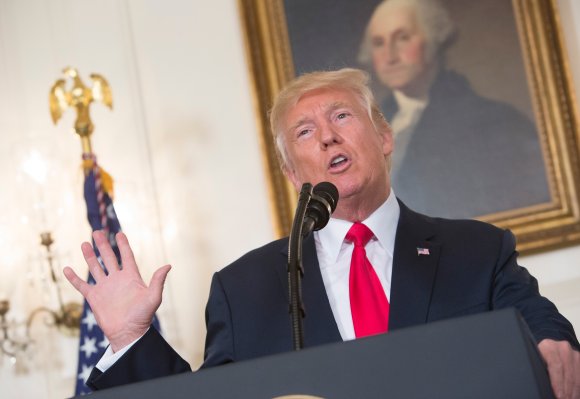