A new ad from President Donald Trump’s campaign that decries Democrats, the media and career politicians as his “opponents” and “enemies” — and some are criticizing it for what they say is tone-deaf timing.

The targeted ad ran just a day after the president called for unity following what he said was violence and bigotry “on many sides” when a deadly white supremacist rally broke out in Charlottesville, Va., over the removal of a Confederate monument.

The ad accuses Democrats and the media of “standing in the way” of Trump’s policies, which are portrayed as widely supported Americans. But while Trump has maintained much of his base support, he has also had consistently low approval rating throughout his presidency. Last week, his approval rating hit 37%, according to Gallup.

However, some people on social media have questioned the timing of such an ad that uses stronger language against Democrats and the media than Trump used against white supremacists and neo-Nazis on Saturday.

As white supremacists carried flags with swastikas and waved Confederate flags in Charlottesville on Saturday, a man drove a car directly into a crowd of counter-protesters, killing 32-year-old Heather Heyer and injuring at least 19 others. Additionally, a Virginia State Police helicopter crashed while assisting law enforcement efforts during the rally, killing two troopers.

While many Republican and Democratic politicians called the violence incited by the white supremacists domestic terrorism and denounced Nazism, Trump spoke out against what he saw as “this display of hatred, bigotry and violence on many sides.” Politicians on both sides of the aisle urged Trump to make a more direct statement targeting white supremacy and Nazism.

As presidents typically fill the role of uplifting a nation with unifying remarks after tragedy strikes, Trump’s comments on the violent rally were especially scrutinized since some of the white supremacists who attended wore red “Make America Great Again” hats and claimed to be promoting Trump’s agenda.

In light of the criticism, the White House released an additional statement Sunday. “The President said very strongly in his statement yesterday that he condemns all forms of violence, bigotry and hatred and of course that includes white Supremacists, KKK, neo-nazi and all extremist groups,” a White House spokesperson said. “He called for national unity and bringing all Americans together.” 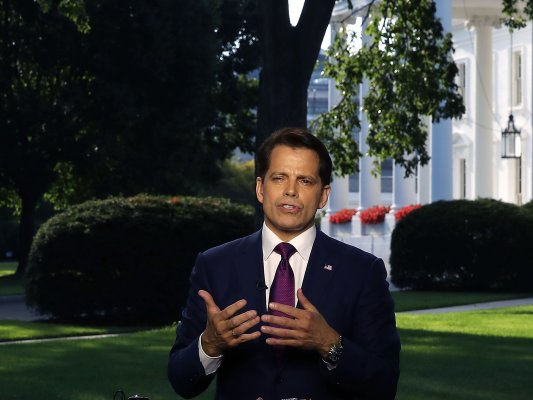 Anthony Scaramucci: President Trump Should Have Called the Charlottesville Rally Terrorism
Next Up: Editor's Pick