Virginia Governor Delivers Defiant Speech Against White Supremacists: 'We Are Stronger Than Them'

“I’ll tell you this: You only made us stronger,” McAuliffe said, referring to the white supremacists.”You go home, you stay out of here, because we are a commonwealth that stays together.”

Addressing the congregation, McAuliffe said Virginians should move forward — beyond the violence that took place over the weekend.

“What I’m asking you today to do is put the anger aside, as I did when I got up this morning,” he continued. “Put it aside. Let us use hope. Let us use today to reach out to our fellow citizens. Let us show these people we are bigger them. We are stronger than them.”

White supremacists and neo-Nazis filled the streets of Charlottesville in protest against the removal of a Confederate monument.

The contentious rally that featured clashes between the white supremacists and counter-protesters turned tragic when a man drove a car directly into a group of counter-protesters, killing a 32-year-old woman later identified as Heather Heyer and injuring 19 others. Additionally, a Virginia State Police helicopter that was assisting law enforcement during the rally crashed, killing two troopers inside.

On Sunday, McAuliffe held a moment of silence for the three people, who he said “lost their lives yesterday doing what they love: fighting for freedom.”

Both Democratic and Republican politicians have condemned the violence incited by the weekend rally. Some have called on President Donald Trump to deliver a more direct statement of disapproval after he spoke out against “this display of hatred, bigotry and violence and many sides.”

While presidential statements following tragedies are often used to bring the country together, Trump’s comments were especially ridiculed as some white nationalists participating in the rally claimed to be promoting the president’s agenda. Some also wore red “Make America Great Again” hats.

While McAuliffe said “this is not about politics,” he did go on to rebuke how political rhetoric has shaped the displays of bigotry and hate in the country recently.

“It is about politics in that political rhetoric in this country today is breeding bigotry,” he said. “We need to call it out for what it is. For the white supremacists and neo-Nazis who came to our beautiful state yesterday, there is no place for you here.”

Late Saturday night, the Department of Justice announced the F.B.I. would conduct a civil rights investigation into the “deadly vehicular incident” during the rally.

“This won’t be the last time this happens,” McAuliffe said. “This isn’t the only city it’s going to happen to. Let us come together. Let us work as one.” 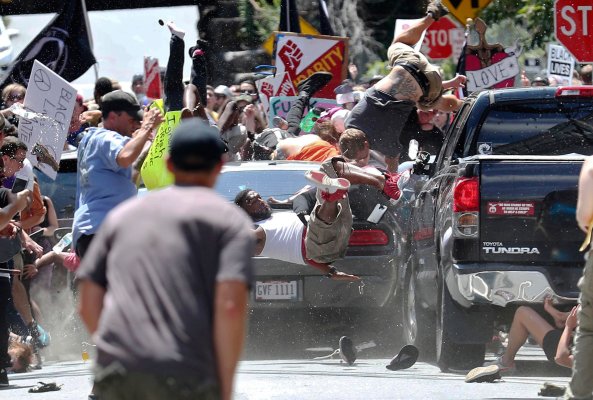 Mother of Suspect Who Allegedly Plowed Into Charlottesville Protesters Speaks Out
Next Up: Editor's Pick