Former White House Communications Anthony Scaramucci, who was fired after just 10 full days on the job, said Sunday that President Donald Trump should have directly condemned white nationalism in his statement regarding the deadly protests promoting white supremacy and Nazism in Charlottesville, Va., over the weekend.

In his first interview since his public ouster from the White House, Scaramucci told ABC’s George Stephanopoulos that he would have advised Trump to make a more direct statement against white nationalism.

“I wouldn’t have recommended that statement,” Scaramucci said. “I think he needed to be much harsher as it related to white supremacists and the nature of that.”

“I applaud General McMaster for calling it out for what it is: It’s actually terrorism,” Scaramucci said. “Whether it’s domestic or international terrorism, with the moral authority of the presidency, you have to call that stuff out.”

Trump came under fire Saturday when he condemned the “hatred, bigotry and violence on many sides” during the violent white supremacist rally. Earlier Saturday, white supremacists waved Confederate flags and ones with swastikas, and a number of counter-protesters gathered in opposition. The situation turned deadly when a man drove a car directly into a crowd of counter-protesters, killing one person and injuring at least 19 others.

A number of Republican and Democratic politicians have called on Trump to more directly condemn the white supremacists — some of whom wore his red “Make America Great Again” hats during the violent rally.

Scaramucci, a former hedge fund executive who joined Trump’s administration in mid-July, was fired after less than two weeks after his appointment. Scaramucci slammed former White House chief of staff Reince Priebus and chief strategist Steve Bannon in a profanity-laced interview with the New Yorker in which he also said he would fire “everyone.” 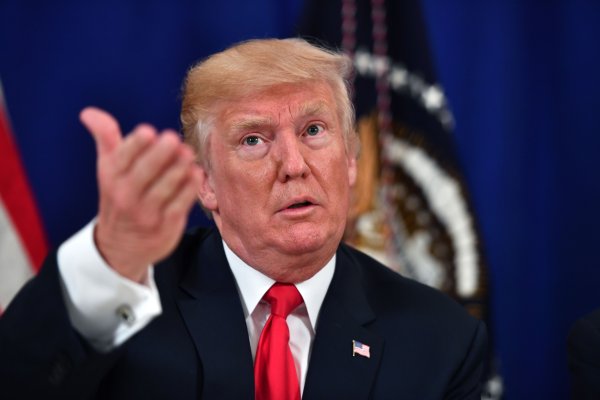 President Trump Struggles to Play Role of National Healer After Charlottesville
Next Up: Editor's Pick