The fourth episode of Game of Thrones‘ seventh season saw Jon Snow take Daenerys Targaryen into the caves of Dragonstone to show her the dragonglass under the island. But the King in the North also had an ulterior motive — convincing her that the White Walkers are the real threat to Westeros.

After passing through the caves, Jon brought Dany to a section filled with paintings that seemed to depict the War for the Dawn — a legendary conflict in George R.R. Martin’s A Song of Ice and Fire series in which the Children of the Forest and the First Men joined forces to defeat the White Walkers.

“The Children of the Forest made these,” Jon told her. “A very long time ago…They were here together, the Children and the First Men…They fought together against their common enemy. Despite their differences, despite their suspicions, together. We need to do the same if we’re going to survive. Because the enemy is real, it’s always been real.”

Thanks to Bran’s greenseeing abilities, we already knew that the Children of the Forest created the White Walkers — from men — to defend themselves against the invading First Men. However, this scene seemed to confirm that the former enemies eventually teamed up against the Others during a dark and terrible period known as the Long Night.

“Thousands of years ago, there came a night that lasted a generation,” Old Nan told Bran in the third episode of season one. “Kings froze to death in their castles, same as the shepherds in their huts; and women smothered their babies rather than see them starve, and wept, and felt the tears freeze on their cheeks… In that darkness the White Walkers came for the first time. They swept through cities and kingdoms, riding their dead horses, hunting with their packs of pale spiders big as hounds.”

The paintings also featured symbols reminiscent of the spiral pattern that has been cropping up in the show since the series’ premiere, which may indicate that the conflict between the living and the dead is destined to come full circle.

“It’s supposed to be something that’s very evocative of the thousands of years that have passed since these caves were first explored and the paintings were first made,” showrunner David Benioff explained in the post-episode discussion. “And also obviously something that’s quite relevant to the current storyline because it’s about how these two disparate peoples united to defeat the common enemy…One of the things we learn from these cave paintings is that the White Walkers didn’t come up with those images, they derived them from their creators, the Children of the Forrest. These are patterns that have mystical significance for the Children of the Forest. We’re not sure exactly what they signify, but spiral patterns are important in a lot of different cultures in our world, and it makes sense that they would be in this world as well.” 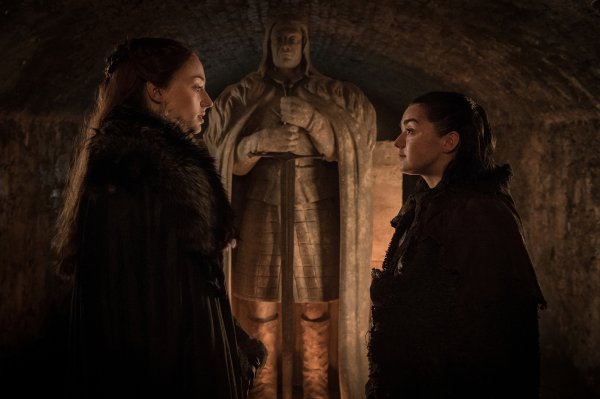 Why Game of Thrones' Sophie Turner and Maisie Williams Couldn't Keep a Straight Face While Filming Their Big Reunion
Next Up: Editor's Pick