A standoff at the White House appears to be at a boiling point. Anthony Scaramucci, the new communications director, took to Twitter and CNN to accuse Reince Priebus, chief of staff to President Trump, of leaking his financial disclosure form.

A picture published on Thursday appeared to be the definitive proof of their bad blood. But is it? The answer is more complicated than it seems.

Washington, D.C.-based photographer T.J. Kirkpatrick got a text from the Wall Street Journal asking if he was free for an assignment at the White House. He was, and so the photographer arrived with a group of reporters. Before the interview, they were greeted by a “very jovial” Scaramucci. After some small talk, the reporters went into the Oval Office for their sit-down with Trump.

Kirkpatrick was called in about five minutes before the end of the interview. Priebus and Scaramucci were already in the room, as was a handful of other communications staff, including spokeswoman Hope Hicks and a White House photographer.

That meant about five minutes to get “as much variety as I can,” he recalls, from the moment he walked in to the moment everyone began to shake hands.

Kirkpatrick, who covered George W. Bush and Barack Obama, had previously been in the Oval Office but exclusively for pool sprays: those lightning-fast gatherings of photographers to capture brief moments between a president and, say, a visiting dignitary.

“It’s the same mindset where you have such a limited amount of time to get as much as possible,” Kirkpatrick tells TIME. “If you’re lucky you come away with three good pictures. But I know from going into those experiences it’s important to pay attention to other people in the room aside from the president because that can be storytelling in itself.”

This image certainly proves that concept.

Priebus, his hand resting on a couch, appears fixated on Scaramucci, who with thumbs tucked into his pants, is looking in Priebus’ direction. “It’s so hard to say what exactly the exchange is that’s happening there,” Kirkpatrick says. “It doesn’t seem like it could be anything but that representation for what people think is happening in the White House.”

Kirkpatrick “wasn’t looking to make that picture.” He wasn’t too aware of the tension between the two aides that has captivated tweets and headlines and airwaves. “I was just reacting to what I saw in front of me when I had a second to look away from the president,” he adds. “But I couldn’t tell you if they were staring each other down the entire time. I don’t know. I got lucky that they looked at each other for that split second.”

The picture quickly gained attention: POLITICO cybersecurity reporter Eric Geller called it “amazing.” Abby D. Phillip, a White House reporter at the Washington Post, labeled it a picture “worth 1,000,000 words.” Darth, a master of Photoshop, had a bit of fun as well.

And so it became the latest image from Washington to make the rounds, well outside of its original journalistic walls of context. It’s a now-and-then occurrence, especially around Trump, but this is a rare instance where Trump isn’t in the shot.

“You kind of have to let go [of the meaning] once the photo goes out,” Kirkpatrick rationalizes. He then references the meme-ification of the well-known Diana Walker portrait of Hillary Clinton, then Secretary of State, using a smartphone during a 2011 trip. The image by Walker, a longtime White House photographer for TIME, is often referred to as “Texts From Hillary.” The distribution of that photo—like this one, separate from the context in which it was originally published—wipes its slate clean: the audience can read into it as they desire. In this age of instantaneous information sharing, it takes on a new life of its own.

“If I’m photographing a scene, it’s something I’m a witness to,” Kirkpatrick says. “If you don’t have that context, if you come to the image from a different perspective, I have no way of controlling how you see that image, what you take away.”

That prompts a question: “And you’re all right with that?”

Correction: The photo caption incorrectly stated the date of the image. It was July 25. 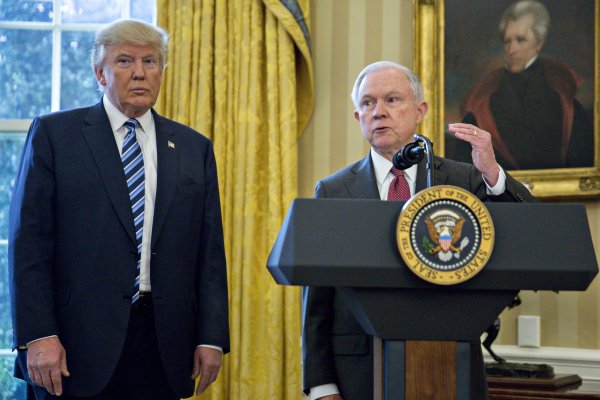 Sessions: Trump's Attacks Have Been 'Kind of Hurtful'
Next Up: Editor's Pick