'She Killed Her Own Sister.' Father Speaks Out After 18-Year-Old Daughter Livestreamed Car Crash

An 18-year-old California woman was arrested after allegedly causing a fatal car crash that killed her younger sister while driving under the influence — and livestreaming it on Instagram.

Obdulia Sanchez was driving her 14-year-old sister Jacqueline Sanchez and another 14-year-old girl about 120 miles southeast of San Francisco on Friday when her vehicle traveled off the road, the Associated Press reports. The California Highway Patrol told Fox affiliate KTXL that Sanchez overcorrected when her car veered, swerving into the opposite lanes, crashing through a barbed wire fence and overturning in a field.

Jacqueline and the other girl, who were sitting in the back seat, were not wearing seat belts and were ejected from the car, according to KTXL. Jacquline died while the other teenager was injured in her leg. Sanchez documented the crash on Instagram Live.

Nicandro Sanchez, the girls’ parents, told ABC affiliate KFSN, that the crash was an “accident” and confirmed his older daughter was livestreaming at the time of the crash.

“I think she doesn’t know what happened,” he told KFSN. “What I think is she knows she’s done something wrong. Because she knows, and that’s what I feel. She feels bad for herself, but she killed her own sister.” 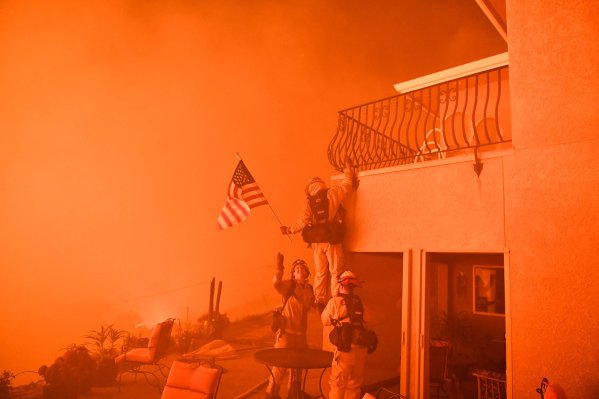 Behind This Surreal Image of Firefighters Saving an American Flag From a Wildfire
Next Up: Editor's Pick