US President Donald Trump (R) and Russia's President Vladimir Putin shake hands during a meeting on the sidelines of the G20 Summit in Hamburg, Germany, on July 7, 2017.
Saul Loeb—Getty Images
By Simon Shuster / Hamburg

Since they first began meeting in 2008 under the banner of the G20, the leaders of the world’s wealthiest nations have mostly used the forum to talk about finance, trade and the global economy. But on occasion, the group would set aside these issues and try to enforce some rules of common decency. Its members did this not by exacting any price or punishment for misbehavior – the G20 has no mandate to do that – but through the method you probably remember from grade school: peer pressure. That, at least, is how the club of nations used to work.

Among the more famous examples involved Russia’s decision in the spring of 2014 to seize the territory of its neighbor, Ukraine, and redraw the borders of Europe by force. By the time the next G20 summit rolled around that November, nearly half of its members – including Europe’s largest economies, as well as the U.S., Canada, Japan and Australia – had imposed sanctions on Russia in response, and they made sure to emphasize their disgust over Ukraine’s dismemberment by making Russian President Vladimir Putin feel like an outcast.

“I guess I’ll shake your hand,” Stephen Harper, then the Prime Minister of Canada, told the Russian leader at that year’s G20 summit in Brisbane, Australia. “But I’ve only got one thing to say to you,” he added. “You need to get out of Ukraine.” Later that day, Putin was filmed sitting apart from his peers during a formal luncheon, picking silently at his food with empty chairs on either side of him. He then decided to leave the summit early, citing his need to get some rest.

Skip ahead a few years to the current meeting of the G20, which began on Friday in the German city of Hamburg, and it seems hard to imagine that kind of ostracism taking place within the group. The conditions for it have evaporated. Even when it comes to the most fundamental rules of political conduct and international law, the leaders of the G20 have splintered into rival factions. None of them appears to have the moral authority – or the political will – to chide the others for breaking the rules.

That much was clear when the host of this year’s summit, German Chancellor Angela Merkel, gave her introductory remarks on Friday morning. Though she touched on the need to empower women and increase aid to Africa, she did not mention free speech, democracy, civil rights or the other ideals to which most of the group’s members have typically aspired. “Solutions can often only be found if we are willing to compromise, if we are flexible,” she said, while also urging her peers not to “bend too much.”

The message did not exactly ring with confidence and fortitude. But that’s not entirely Merkel’s fault. While she has recently been pegged as the new moral backbone of the Western world, the Chancellor does not have the clout to play that role in a venue like the G20. Not even the U.S. would have that kind of muscle on its own. Strength in such chambers does not exist in isolation, and when Canada’s Harper decided to confront Putin so forcefully three years ago, he could feel sure that the U.S., Europe, Japan and others had his back.

That would no longer be true today. As Merkel noted in her opening remarks, the best way to achieve consensus among the G20 is by accommodating its members rather than pressuring them. This hinted at a shift within the group toward a kind of moral relativism: You do you, and if anything, we’ll just agree to disagree.

At no time was that more clear than during Friday’s much-anticipated meeting between Putin and his new American counterpart, President Donald Trump. Though U.S. and European intelligence services have concluded that Russia muscled into the American presidential elections last year with an elaborate campaign of hacking, misinformation and other dirty tricks – a campaign that has allegedly spread across Europe and intensified since those elections – President Trump appears to have told Putin that they should let bygones be bygones.

“There was not a lot of re-litigating of the past,” U.S. Secretary of State Rex Tillerson told reporters after the two-hour meeting, which he attended. “The Presidents rightly focused on how do we move forward from what may simply be an intractable disagreement at this point.”

Broader issues of human rights and the rule of law do not appear to have been mentioned at the meeting. And how could they have been? After Trump’s recent attacks against journalists, migrants and religious minorities, “The U.S. is no longer an ally on these issues,” Barbara Unmüssig, one of Germany’s leading activists for civil rights, told me before the G20 summit. “On the contrary, it is undermining the credibility of industrialized democracies.”

The only institutions that still seemed capable of exerting moral pressure on G20 leaders this year were the media and civil society. The latter at least managed to inconvenience the statesmen in attendance. With a wave of coordinated and often violent demonstrations, protestors paralyzed Hamburg in their effort to denounce what they see as the injustice of unfettered capitalism. They even forced Trump’s cortege to take a long detour to the conference venue on Friday morning, while his wife Melania remained stuck in a German government guesthouse as protestors blocked roads and set cars on fire. “She was prevented from participating in today’s spousal program,” the First Lady’s spokesman told reporters.

The wagging fingers of the media, by contrast, did not do much to trip up the delegates. During an interview a few days before the summit with Turkish President Recep Tayyip Erdogan, German newspaper Die Zeit grilled him about Turkey’s ongoing campaign of persecution against journalists, dissidents and just about anyone else Erdogan accuses of “supporting terrorism,” including the dozens of German citizens who are currently locked up in Turkish prisons. Erdogan, clearly in no mood to defend his authoritarian tendencies, brushed the criticism away: “Well, this here isn’t Germany,” he said. “Turkey has its own imperatives and rules.”

And German Chancellor Merkel was in no position this week to question the rules Erdogan plays by. She was too busy scraping together enough common ground to fill the summit’s final declaration. Even before it was published on Saturday, it seemed clear that the only leader facing isolation at the summit would be Trump, especially when it came to the issue of global warming.

Indeed, Trump’s decision last month to pull out of the Paris climate accords has put the U.S. in a league with Nicaragua and Syria, the only two countries in the world that did not sign up to the agreement in 2015. (Nicaragua decided not to sign because it said the deal would not do enough to reduce the emission of planet-warming gases.) In drafting their statement on this issue on Friday, the G20 delegates decided to remove a reference to a “global approach” to dealing with climate change.

It was a relatively minor tweak, but it pointed to a lesson that did not appear in the G20’s communiqué: No global approach is possible without agreement between the U.S. and its traditional allies, not even on issues and principles that seemed to be settled long ago. That reality may feel liberating for the leaders who have felt constrained or isolated due to the pressure of their peers, like Putin and Erdogan. But for the leaders who used to apply this pressure, it signals a new era of moral flexibility, one in which they should prepare to bend when their rules are broken.

Correction: The original version of this story incorrectly described the countries that did not sign the Paris climate accords. They are Nicaragua and Syria. 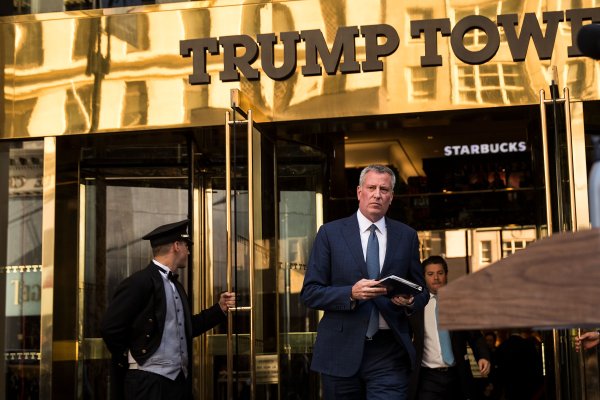 NYC’s Mayor Is Heading to a Trump Protest in Germany
Next Up: Editor's Pick