President Donald Trump and MSNBC Morning Joe hosts Joe Scarborough and Mika Brzezinski are caught up in a dustup that’s seeing allegations and snark fly from all sides.

What exactly are the President of the Unites States and TV anchors fighting about? If you need a quick catchup on what’s happening, here’s a helpful timeline of how the spat began Thursday morning and has developed since then:

President Trump launches an attack on Morning Joe, nicknaming Brzezinski and Scarborough “low I.Q. Crazy Mika” and “Psycho Joe.” In a second tweet, Trump says that Brzezinski once showed up to his Mar-a-Lago estate in Florida “bleeding badly from a face-lift.” The latter comment was met with shock even by members of the President’s own party.

Neither hosts immediately respond. But around an hour and a half later, Brzezinski shares an image on Twitter referencing a long-running joke about the size of Trump’s hands — something Trump himself infamously weighed in on during a Republican presidential debate last year.

Mark Kornblau, spokesperson for NBCUniversal News Group, posts a tweet saying he “never imagined a day” when he would think that it was “beneath [his] dignity to respond to the President of the United States.”

MSNBC releases a statement calling it a “sad day for America when the president spends his time bullying.”

Nebraska Republican Sen. Ben Sasse condemns Trump’s posts on Twitter. “Please just stop. This isn’t normal and it’s beneath the dignity of your office,” he writes.

Oklahoma Republican Sen. James Lankford said in a statement that Trump’s tweets “don’t help our political or national discourse and do not provide a positive role model for our national dialogue.”

Sarah Huckabee Sanders doubles down on her defense of the President during the daily White House press conference. “When he gets attacked he’s going to hit back,” said the White House spokeswoman. “I don’t think it’s a surprise to anyone that he fights fire with fire.”

Former White House communications director and MSNBC host Nicolle Wallace slams Trump’s comments. “All the women [working in the White House] collecting pay-checks from the U.S. taxpayers… you should all go on the record and condemn your boss’ comments and you should work behind the scenes to educate him about just how offensive they are,” she says.

Brzezinski and Scarborough publish a scathing op-ed in The Washington Post, called ‘Donald Trump is not well.’ In it, they write that it is “disturbing that the president of the United States keeps up his unrelenting assault on women.”

Brzezinski and Scarborough appear on MSNBC to talk about Trump’s tweets. Scarborough alleges on the show that senior White House aides asked him to apologize to the President to prevent the publication of a negative story about Scarborough in the National Enquirer.

Scarborough responds over Twitter, asking President Trump why he keeps “lying about things that are easily disproven.”

“I have texts from your top aides and phone record,” Scarborough adds. “Also, those records show I haven’t spoken with you in many months.”

Jerry Springer weighs in on Twitter. “I’m sorry, but Trump’s behavior is not just beneath the dignity of the Presidency…but that of any decent man,” he writes, later adding: “Every day, I’m presented with someone who acts inappropriately. Why would anyone think that behavior belongs in the White House?” 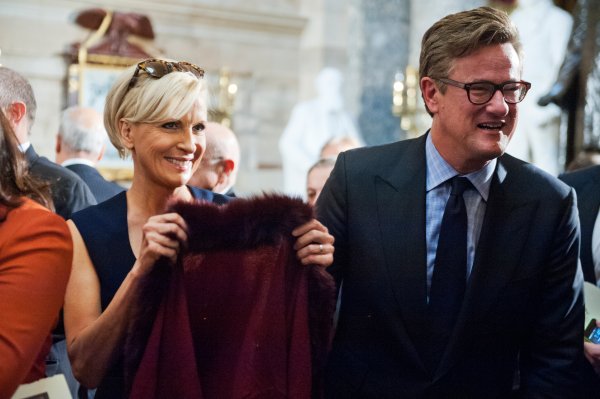