Why Is the President So Disgusted By Women and Our Blood?

On Thursday, President Donald Trump tweeted that Mika Brzezinski was “bleeding badly from a face-lift” in an attempt to insult the Morning Joe co-host.

The much-criticized comment was the latest bullet point in Trump’s history of making disparaging remarks about women’s appearances. But it also wasn’t the first time Trump has made a disparaging remark about women related to blood. While Trump’s tweet about Brzezinski alleged she was bleeding because of a botched plastic surgery procedure, there is one thing that immediately comes to mind when women and blood are put in the same sentence: periods.

During the first Republican presidential primary debate, Megyn Kelly questioned Trump about his treatment of women. During an interview with CNN after the debate, Trump said Kelly had “blood coming out of her eyes…blood coming out of her wherever.” Trump said he was referring to Kelly’s nose, but many others interpreted the comment as a sexist insult about the journalist’s period. And, during the campaign, a 1997 interview Trump gave to Howard Stern resurfaced where Stern asked Trump whether he’d seriously have sex with a woman who was menstruating, as if it was gross to do so. “Well, I’ve been there. I have been there Howard, as we all have,” Trump told Stern. “Well, sometimes you get there by mistake.”

Trump’s invocation of blood evokes a deep history of using menstruation against women. There’s the idea that women are moody, angry and irrational on their period, an archaic stereotype that some used to argue why women like Hillary Clinton shouldn’t be president. There’s the taboo that periods are somehow shameful, which has historically prevented women from working during their period and still causes girls in some parts of the world miss or drop out of school. And there’s the idea that menstruation is somehow disgusting and women are somehow uncouth during that time of the month.

“Women face an onslaught of negative imagery about menstruation, as the media implies that menstruation makes women ‘unclean,'” Breanne Fahs writes in Out for Blood: Essays on Menstruation and Resistance. “Even the phrase feminine hygiene, a relic from 1930s advertisements for birth control, connotes that women should construct menstrual blood as fundamentally dirty.”

The taboo around menstruation plays into a larger cultural stereotype that women’s bodies — including their hair, their fat and vaginal discharge — are somehow gross. And Trump has played into that idea on occasion as well. During a rally, he said it was “disgusting” his opponent Hillary Clinton used the bathroom during a debate. Attorney Elizabeth Beck claimed Trump used the word in 2011 to describe her breastfeeding. (Trump’s lawyer did not dispute that he used the word and the Trump Organization’s general counsel said Beck was “disgusting” for allegedly breastfeeding in the middle of the room, according to CNN.) In fact, “disgusting” is one of his choice insults toward women, as he’s thrown the word at former Miss USA Alicia Machado, Madonna and Rosie O’Donnell.

Trump has repeatedly said that he respects women. But in order to truly do that, President Trump needs to keep women, their faces and their bodies out of it. 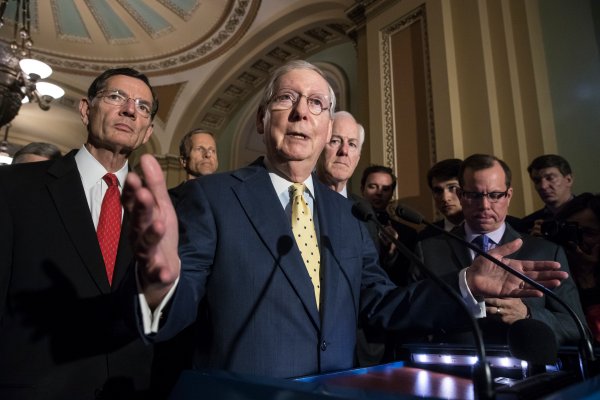 How the Senate's Health Care Bill Will Seriously Hurt Black Women
Next Up: Editor's Pick