Sam Sanders of NPR Politics has a new podcast, and he hopes his show will be a little more upbeat than the daily politics headlines. As a campaign reporter during the 2016 presidential election, Sanders’ sense of humor earned him fans as he drew connections between politics and pop culture. His new conversational podcast will cover the intersection of those two subjects. It’s called It’s Been a Minute, as in when you meet up with your friends and catch up because, hey, it’s been a minute.

“I was a little worried at first about whether listeners of various ages would get the name, so I called Aunt Betty, who has been announcing our guest lineup,” says Sanders. “I told Betty we’re going to call it ‘It’s Been a Minute,’ and she says, ‘Oh my God, I love that. I hear it all the time.’ So I feel good about this.”

It’s Been a Minute will drop two episodes per week. In the Tuesday morning episode, Sanders will do a “deep dive” into a certain subject or a long interview with newsmakers like Lena Waithe of Master of None or Lakeith Stanfield of Get Out and Atlanta. In the Friday evening episode, Sanders will talk through the news of the week with two guests, often other journalists or thinkers. One such discussion could be a breakdown of what’s going on at Uber. (“There’s a push now to bring in women executives, which is great, but I’m like we always bring in women or minorities when s— hits the fan and then ask them to clean up this mess a dude made and maybe set them up to fail.”) That second edition also includes a feature where they call a listener from somewhere across the country or the world and ask what the big news is in their area.

Sanders is both a politics and pop culture junkie — he’s currently obsessed with both Comey-gate and the phenomenon that is Dwayne Johnson — and plans to explore how they intersect on the show. “How am I going to have a totally comprehensive conversation about the Black Lives Matter movement without discussing the role that figures in popular culture like Beyoncé or Chance the Rapper played in that dialogue?” he asks. “How am I going to talk about notions of gender and what it means to be a woman without talking about figures in culture like Lena Dunham or Taylor Swift or Nicki Minaj?”

That’s especially true when it comes to talking about the White House: “The Donald Trump that we know and either love or hate as president was fully formed and crystallized over the years hosting a reality show. So how can we understand politics in this day and age without having a working knowledge of popular culture.”

Lest Sanders and his guests get bogged down in reciting the headlines of the week, the host ends each episode by playing an upbeat listener anecdote — a recent birth, a graduation, a conversation with a friend that made them happy. “It’s just to remind us that the world is still good,” says Sanders. “And it is worth taking time to celebrate that even in the smallest of ways.”

Sanders sums up the podcast with just a few words: “I want to be informed and curious: I need to do my homework to know what I’m talking about but want to still have questions that push the conversation forward. And I want to be open and affirming: Open to other points of view but affirming to my guests that they’re welcome and we want their voice.” 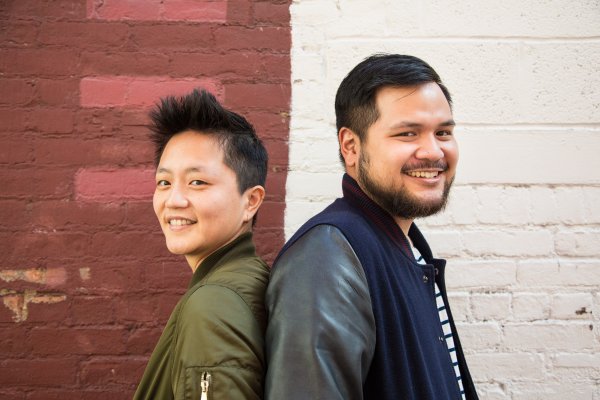 Why You Need to Listen to Nancy, a Radically Honest Podcast on LGBTQ Issues
Next Up: Editor's Pick