‘My Single Focus Was to Stay Alive.’ How This Virginia Shooting Victim Survived

Zach Barth, a legislative aide for Rep. Roger Williams who was shot in the leg Wednesday when a gunman opened fire on a Republican baseball practice in Virginia, said he relied on his survival instincts to ensure he would emerge from the situation alive.

” I saw him train his gun at me and everything around me started to pop,” said Barth, who appeared with Williams on CBS This Morning. “My fight or flight kicked in, I decided if I wanted to live, I needed to make a run for it.”

He ran to the dugout, he said, right into his boss’s arms.

“My single focus was to stay alive and to keep everyone around me safe,” he said.

As of Wednesday evening, Griner was hospitalized, but in stable condition. Scalise was in critical condition at Medstar Hospital in Washington, D.C. Mika had undergone surgery and was expected to remain in the intensive care unit for several days.

The suspect, identified as 66-year-old James Hodgkinson, succumbed to gunshot wounds sustained during rounds of fire with law enforcement. The FBI is investigating possible motives around the shooting. His brother told the New York Times Hodgkinson was upset that Donald Trump won last year’s presidential election.

The FBI declined to comment on any sort of political motive. But Williams, who is the coach of the Republican team and hurt his ankle during the shooting, said it was clear the gunman was targeting lawmakers.

The shooting happened while Republicans were practicing for Thursday’s Congressional Baseball Game at Nationals Park, a tradition that dates back to 1909. Both Williams and Barth said they are planning on attending the game, which is still scheduled for Thursday evening. 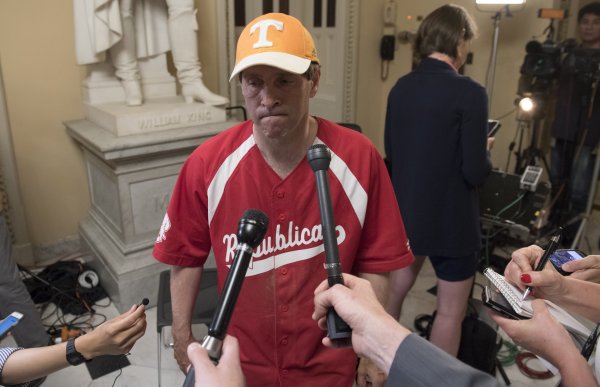 Members of Congress United in Prayer and Fear After Shooting
Next Up: Editor's Pick