President Trump Faces a Moment of Truth as Comey Testifies

President Trump’s presidency is set to face its toughest test yet Thursday, as James Comey, the former FBI Director, testifies before Congress about the conversations that led to his unceremonious firing last month.

In his prepared testimony, posted online by the Senate Intelligence Committee Wednesday afternoon, Comey will disclose efforts by Trump to influence ongoing investigations he perceived to be inappropriate.

Comey will detail a request from Trump for “loyalty” at a private dinner, comments at a meeting in the White House that he hoped that Comey would drop an investigation into former National Security Advisor Mike Flynn and a request that he work to “lift the cloud” surrounding the Administration on the Russia investigation.

If true, the requests would reveal a striking departure from past presidential practice, with multiple attempts to intervene in ongoing FBI investigations which are supposed to be independent of political influence.

Comey sidestepped those requests, as well as Trump’s appeal for loyalty, in the run-up to his firing, he will testify, in what may be the most-anticipated political moment since the Clinton impeachment hearings. Bars in Washington, D.C., are set to open early for the event, with one offering drink specials for every time the president tweets during the day.

White House aides were caught off guard Wednesday by the release of Comey’s prepared opening statement and rushed to devise a response. Trump and his senior aides huddled in the Oval Office to review their strategy for responding to Comey’s allegations. Administration spokespeople referred reporters to Trump’s outside counsel, Marc Kasowitz, who released a statement late Wednesday that it had vindicated the President since Comey acknowledges telling Trump he was not the focus of the investigation.

“The president is pleased that Mr. Comey has finally publicly confirmed his private reports that the president was not under investigation in any Russia probe,” Kasowitz said, referencing Comey’s confirmation that he had told Trump he was not personally the target of an investigation. “The president feels completely and totally vindicated. He is eager to continue to move forward with his agenda.”

But Comey’s testimony stands to be a significant embarrassment to the President at least, and could raise questions about possible obstruction of justice in Trump’s improper requests.

Even Trump allies acknowledged the detailed conversations were inappropriate, though they question whether Trump ever intended for them to be so. Appearing on MSNBC, New Jersey Gov. Chris Christie called Trump’s comments, “normal New York City conversation,” adding Trump wasn’t aware he was out of bounds.

But White House Principal Deputy Press Secretary Sarah Sanders indicated that Trump won’t be backing down from his denial that he had asked Comey to drop the FBI’s investigation of Flynn.

“I can’t imagine the president not standing by his own statement,” she told reporters on Air Force One.

The White House spurned proposals to set up an internal war room to rebut Comey’s allegations and the broader Russia investigation. Instead, the Republican National Committee is set to take the lead, officials at the White House and the RNC said. Officials said the plan is both to defend Trump from inevitable attacks, and to work to discredit Comey.

While the White House plans to remain silent Thursday, it has by no means been out of the loop. Senior officials from Chief Strategist Steve Bannon to Press Secretary Sean Spicer have been in contact with the RNC and others to coordinate the response.

Pro-Trump outside groups, conservative talking heads, and friendly lawmakers on Capitol Hill all received detailed talking points and draft tweets from the RNC—and sanctioned by the White House—late Wednesday. Spicer has spent time at the RNC building on Capitol Hill to fine-tune the plan. Even former Trump aides Mike Dubke and Katie Walsh have also been involved in the effort, officials said.

A pro-Trump nonprofit group, Great America Alliance, is running an ad echoing Trump’s charge that Comey was a political “showboat” that is set to air around his testimony.

The RNC is also activating its national and local surrogates to rebut the Comey testimony, and is holding calls every 30 minutes to transmit the latest talking points. Researchers at the committee have prepared a matrix of potential responses to Comey’s revelations, and it will blast the appropriate observations to reporters by email and the general public on Twitter and Facebook.

One focus will be on highlighting Democrats’ past criticism of Comey, an official said, as well as Comey’s own past testimony on the Russia investigation. 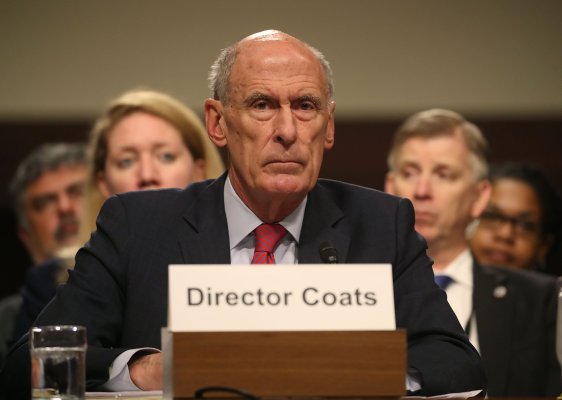 Intel Chiefs Say They Haven't Been 'Pressured'
Next Up: Editor's Pick