The Liberal Democrats Bet on a Brexit Election. It Hasn't Paid Off

It’s a cold evening in April, and a loud bang has just stopped a huddle of political canvassers in South London. “He shut the door in my face,” says Richard Phillips, a 62-year-old retired advertising executive campaigning for the Liberal Democrats party in the constituency of Vauxhall. “I suppose they won’t be voting for us,” he says to George Turner, the Liberal Democrats candidate for Vauxhall who is attempting to take the seat from the local MP. The group moves on, to bang on more doors and hand out more leaflets.

Doors have been slamming across the U.K. over the past six weeks as voters are presented with yet another set of political pitches on their stoops before the snap general election on June 8, called by Prime Minister Theresa May a little less than two months ago. It’s the third vote in three years here, after the general election of 2015 that delivered David Cameron a parliamentary majority and last year’s ‘Brexit’ referendum that forced his resignation.

May launched the election as a bid to boost her mandate in the upcoming negotiations to leave the E.U., and many expected Britain’s future outside the political and economic bloc to be the focus of the race. On the face of it, this seemed like good news for the Liberal Democrats — Britain’s third party, created in 1988 as a center-left alternative to the two largest parties. Having been all but wiped out in the 2015 election, the “Lib Dems” plotted a comeback built on the support of anti-Brexit voters. The “Lib Dems” launched a manifesto calling for a second referendum on the final Brexit deal, where voters can either accept the deal or choose to remain in the E.U. — something both Jeremy Corbyn’s Labour Party and May’s Conservative Party, or “Tories,” have ruled out.

Promising a do-over on “Brexit” should logically have been a popular pitch – the 16 million ‘Remainers’ number five million more than the Tories’ total vote share in 2015, and nearly 7 million more than Labour’s. A vast center-ground remains unaccounted for as the country’s biggest parties become more polarized, tilting their messages further left and right on the political spectrum. “The election was called because of Brexit,” would-be MP George Turner tells TIME. “In many ways this is a single issue vote.”

But polls suggest the Liberal Democrats will gain barely any seats at all on June 8. Analysts predict that they will struggle to win back its seats in rural, Euroskeptic areas, especially in South West England. “[The result] is going to be patchy,” Tony Travers, an elections expert at the London School of Economics, tells TIME. “The Liberal Democrats set their stall so strongly against Brexit and in favor of another referendum, have got virtually nowhere with it.” Betting on Brexit is looking like a bust.

Two years ago, it looked as if the Lib Dems had hit rock bottom. The party went from holding 48 parliamentary seats to just eight after the 2015 election, as younger and left-leaning voters punished the party for the five years it spent in coalition government with the Conservative Party. The Lib Dems were seen to have reneged on key promises, most infamously a pledge to stand in the way of tuition fees for higher education that was dropped under pressure by their Conservative partners.

The party was enthusiastically anti-Brexit in the referendum campaign, and defeat appeared to galvanize it in opposition. Under new leader Tim Farron, the party rode an anti-Brexit strategy to success in December in a local election in the London constituency of Richmond. More than 100,000 people joined the party in the wake of the referendum, among them Rachel Johnson, a prominent journalist and sister of vocal Leave campaigner Boris Johnson, now Foreign Minister. Speaking to a Brexit convention on May 12 in London, Johnson said, to loud cheers from the Remain-leaning audience, she became a Liberal Democrat because the party was offering voters “a second look at whatever deal there is.”

Some 600 pro-European candidates also flocked to the Lib Dem ranks; people like George Turner. His key rival in Vauxhall — an urban constituency of about 73,000 people — is Kate Hoey, a former Labour Party cabinet minister who was among the most vocal ‘Brexiteers.’ Hoey even joined former far-right leader Nigel Farage on the campaign trail. Turner, by contrast is a British-Croatian national who voted to remain in the E.U. Almost 8 in 10 of his potential constituents did, too — one of the highest shares against Brexit in the country.

And yet the polls have consistently given the Liberal Democrats between 7 and 10% of the vote — which will likely give them roughly the same result as last time around.

In many ways, it’s not their fault. A handful of political upsets, which includes a terrorist attack in Manchester and another assault at London’s Borough Market five days before the vote, has tilted a one-issue vote into a traditional race focused more on domestic issues such as social services, security, austerity and the country’s creaking health provider, the National Health Service (NHS). Prime Minister May, who was initially predicted to win in a landslide, saw her unassailable 20-point lead against Labour narrow to around five points at the end of May— due to a pledge to make people pay more of the costs of social care, which was branded the ‘dementia tax.’ Some are predicting a hung Parliament or a small majority for the Tories.

But the apparent shift in voting intentions has not translated to votes for the Liberal Democrats. Those who have Brexit buyer’s remorse seem more likely to vote for Labour who, unlike the Liberal Democrats, have a better chance of winning and have positioned themselves as slightly less pro-Brexit than the Tories. Some say there just isn’t room for a third party to make much difference. “The Tories are getting 30% of Remain voters and will win about two thirds of leave voters, while the plurality of Remain voters will go for Labour,” Philip Cowley, Professor of Politics at Queen Mary University in London tells TIME.

Even the most senior Liberal Democrats concede that many Brits feel the Brexit question has been answered, no matter how they voted in 2016. “Much as I’d like to think there’s an army of 48% of the British electorate ready to rise up as one and say that they’re all Liberal Democrats now, former leader Nick Clegg tells TIME, “the truth of course is there are many people who, in keeping with a very sort of pragmatic British spirit, are saying ‘oh well, we must now move on and make the best of it.”

There’s also a sense that two years is not quite enough to spend in the wilderness, especially among younger voters who feel the Lib Dems did not do enough to resist the Tory agenda while in government. According to a You Gov poll for the Sunday Times, nearly three-quarters of people between the ages of 18 to 24 will vote Labour— no doubt buoyed by the party’s popular policy pledges of increased taxes on companies and the abolishment of college fees. “The damage done to the Liberal Democrats by the years in the coalition are going to take more than one Parliament to repair,” Travers says.

The object for Liberal Democrats, then, is to use this election to build a platform for the future — not just on Brexit, but on other campaign pledges pitched at young, metropolitan voters, like marijuana legalization and cleaner air standards. “This isn’t an election when the Liberal Democrats will be sweeping to power,” Lib Dems strategist Mark Pack says. “It is important to play the long game in some sense.”

But some see more radical changes coming, once this election is over. One senior party figure, who asked to remain anonymous to speak freely, told TIME that a new movement needs to rise from the ashes of the snap election, much like the En Marche! movement which Emmanuel Macron rode to the French presidency. “I am not saying electoral packs; I’m not saying progressive alliances,” says the senior figure. “They will be minor and on the edges, but something which brings those who hold broadly progressive views together and which above all, appeals to those beyond the political parties.”

First, though, comes this election. The Liberal Democrats are still hoping to spring a surprise in Vauxhall, where Turner is campaigning hard to overturn Hoey’s majority of 12,000. Bookmakers don’t favor a shock, though — Hoey is 1/7 to retain the seat, according to local media.

If she does, it will be because of voters like Georgie Darroch. The 31-year-old conservationist voted for the Liberal Democrats in 2010, and to Remain in 2016, but is now leaning towards voting Labour in Thursday’s vote. The referendum has polarized the country, she says, and she wants to vote for a party that will foster national unity. “I don’t necessarily think going back on the [referendum] vote is going to be the best. I think we should be pushing for meaningful change.” 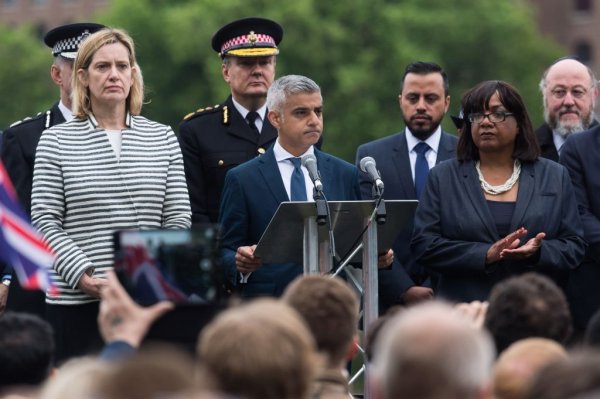