It’s been the scene of career-defining performances by Amy Winehouse, The Clash and Coldplay. But Friday night, the Brixton Academy in south London played host to an unlikely rock star: Sen. Bernie Sanders.

The 75-year-old white-haired politician was greeted by rapturous cheers, whistles and screams of “We love you Bernie!” as he took to the stage. After thanking the audience for coming to out see him and offering his condolences for the terrorist attack in Manchester in May, Sanders launched straight into an attack on President Donald Trump.

“Please understand that when Trump speaks or acts he does not speak for the majority of the people of the United States,” he began. “He won the presidency as a result of winning the majority of the electoral votes. He lost the general election in terms of popular votes by almost three million votes.”

Citing recent polling, Sanders reminded the audience that “at this point in his presidency,” Trump is the least popular president in history. “What he has been doing is trying to isolate the United States of America from the U.K. and from Europe,” he said.

The senator, who is in the U.K. over the weekend as part of a tour to promote his book Our Revolution: A Future to Believe In, spoke about his disappointment in Trump’s decision to withdraw the U.S. from the Paris climate change agreement. “It is unacceptable and an international embarrassment for me to be here before you as a United States senator to tell you we have an administration in Washington which rejects science in regards to climate change,” he said.

“Despite the overwhelming agreement by scientists who have studied the issue, Trump during the [presidential] campaign told the American people that he thought climate change was a hoax. You know and I know that climate change is not a hoax, [it] is real and is caused by human activities and is already causing devastation throughout the entire world, particularly impacting the poorest people of this world.”

“What I want to tell you,” Sanders continued, “is that with or without Donald Trump, the people of the United States — our cities, our towns and our states — will continue to go forward aggressively in transforming our energy system away from fossil fuel to energy efficiency and sustainable energies like wind, solar, geothermal and other technologies.”

“If you haven’t caught on yet, I kind of think Donald Trump is not a great president,” he joked.

Comparisons have been drawn between Sanders and Jeremy Corbyn, the leader of Britain’s left-wing Labour Party. Although Sanders has not formally endorsed Corbyn for the June 8 election, he has commented on the similarities between the two leaders, including their commitment to tackling class issues.

Although Sanders generally steered clear of discussing British politics, instead focusing on issues including the “nonsensical” U.S. healthcare system, Trump’s attacks on the media and the Democratic Party’s future, he did hint at his support for Corbyn. When taking questions from the audience at the end of his speech, compère David Lammy — a British Labour politician — read out a ‘text’ he had received from the Labour leader.

“Can you wish Bernie solidarity and thanks and a huge welcome to Britain and after Thursday can he come back when I form a new government?” the message read. In response, and to the delight of the audience, Sanders answered: “Please text back Mr Corbyn [and say] that I would be more than delighted.” 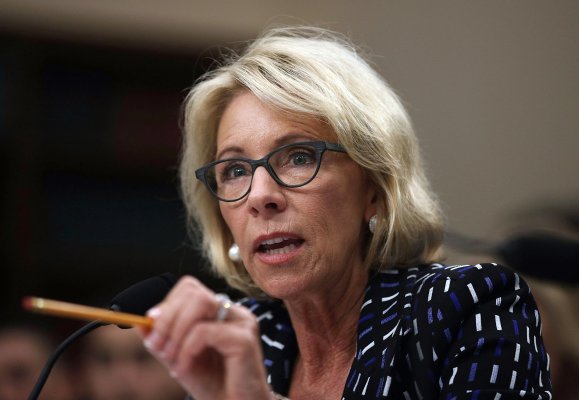 Betsy DeVos on Global Warming: 'Certainly the Climate Changes'
Next Up: Editor's Pick