(MANCHESTER, England) — The suicide bomber who killed 22 people including children in Manchester likely did not act alone, Britain’s interior minister said on Wednesday as soldiers were being deployed to key sites to help prevent further attacks.

The official threat level was raised late on Tuesday to its highest level, “critical”, meaning an attack is expected imminently.

Police have named British-born Salman Abedi, 22, as the perpetrator of the bombing at the Manchester Arena indoor venue at the end of a concert by U.S. pop singer Ariana Grande on Monday, attended by thousands of children and teenagers.

“It seems likely, possible, that he wasn’t doing this on his own,” interior minister Amber Rudd told BBC radio.

Rudd also said Abedi had been known to security services before the bombing.

She said up to 3,800 soldiers would be deployed on Britain’s streets, freeing up police officers to carry out patrols and investigatory work.

The identities of the victims were becoming known little by little. They included an eight-year-old girl, two teenage girls and a 28-year-old man. A Polish couple who had come to collect their daughters after the concert also died, Poland’s foreign minister said. The daughters were safe.

The bombing also left more than 60 people wounded, some with life-threatening injuries.

“There is damage to major organs, major injuries in terms of limbs and some of these individuals are going to need very long term care and support. These are highly traumatic injuries.”

The Manchester attack was the deadliest in Britain since July 2005, when four British Muslim suicide bombers killed 52 people in coordinated attacks on London’s transport network.

As Collomb was speaking in France, Rudd was asked by the BBC about the fact that lots of information about Abedi, including his name, had come out from the United States and whether she would look again at information sharing with other countries.

“Yes, quite frankly. I mean the British police have been very clear that they want to control the flow of information in order to protect operational integrity, the element of surprise, so it is irritating if it gets released from other sources and I have been very clear with our friends that should not happen again.”

Read More: Why The Manchester Attack Was an Attack on Girlhood

Asked whether the U.S. leaks had compromised the investigation, she said: “I wouldn’t go that far but I can say that they are perfectly clear about the situation and that it shouldn’t happen again.”

Prime Minister Theresa May said on Tuesday it was possible a wider group was linked to the bombing, prompting the deployment of troops a little more than two weeks before a June 8 national election.

An independent body which sets the threat level recommended it be raised to “critical” from “severe” for the first time since June 2007.

“This means that their assessment is not only that an attack remains highly likely but that a further attack may be imminent,” May said in a televised statement from her Downing Street Office.

“Armed police officers responsible for duties such as guarding key sites will be replaced by members of the armed forces … You might also see military personnel deployed at certain events, such as concerts and sports matches.”

ISIS, now being driven from territories in Syria and Iraq by Western-backed armed forces, claimed responsibility for the Manchester attack, but there appeared to be contradictions in its account of the operation.

The militant group has repeatedly called for attacks on Western countries as retaliation for their involvement in the conflicts in Syria and Iraq. 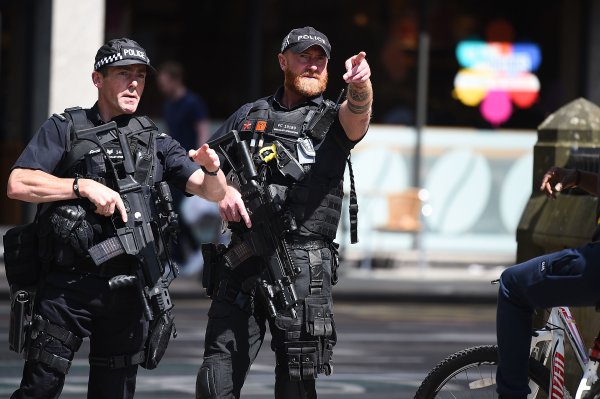