Sunday night was Drake’s night at the annual Billboard Music Awards, held this year in Las Vegas, Nevada and hosted by Ludacris and former High School Musical star Vanessa Hudgens. The rap mogul took home 13 awards including Top Artist, breaking Adele’s previous record for most prizes picked up by an artist in a single night. (The full list of winners can be found here.)

Nicki Minaj: The generous queen kicked things off with a tour-de-force 9-minute opening medley. Featuring assists from Jason Derulo, David Guetta, and Lil Wayne, Minaj went all-in on an aggressive costuming scheme, uninhibited choreography, and her fiery rhymes (which she somehow managed to self-censor for the ABC audience).

BTS: The seven-member K-pop boy band, full name Bangtan Sonyeondan, blew up social media during the course of the evening, their voracious fandom inundating feeds with support for the group. In their first appearance at a U.S. awards show, they handily took home the prize for Top Social Artist, and made quite a few new fans in the process (Halsey included). If this is any indication, BTS is poised to become one of K-pop’s first real stateside crossover successes.

Drake: In his first acceptance speech, Drizzy tossed a compliment to the evening’s co-host Vanessa Hudgens; Nicki Minaj’s comic reaction spawned one of the night’s best memes. He also made nice with Ludacris, in an attempt to settle their long-standing beef. But there was more to come from the More Life creator, starting with his literally fiery performance of “Gyalchester” from the center of the famous Bellagio fountains. Backgrounded by sprays of water, flames, and fireworks, he outdid even Britney Spears with his antics. (She pioneered the Bellagio fountains approach in 2001.) Then, for his big win of the night for Top Artist, two important things happened on the stage: first, he claimed Nicki Minaj was the “love of his life.” And then he took a shot of Virginia Black whiskey straight from the bottle, because it’s Drake’s world, and he makes the rules. As he said, “Life is like toilet paper. You’re either on a roll or you’re taking sh– from an a–h—“, a sentiment that was bleeped out on live TV (and was the night’s realest — and funniest — moment.)

Celine Dion: As footage of Titanic played on the screens behind her, an eternally flawless and otherworldly Celine Dion belted out “My Heart Will Go On” to celebrate the 20th anniversary of the song’s release. As ever, Dion’s poise and vocal command left the audience awed.

Cher: As the winner of the Icon Award, Cher came out to sing and strut her way through not one but two of her classics. And if you think the 71-year-old singer and actress was going to tone down her look, think again: from sheer mesh leotards to nipple pasties and outrageous wigs, Cher proved that age is no indicator of what a star can or cannot do on live television. “I wanted to do what I do since I was 4 years old and I’ve been doing it for 53 years,” she said humbly as she accepted her award, insisting that she’s been lucky.

Miley Cyrus: In a stripped-down, country-flavored live debut of her new single “Malibu,” Cyrus teared up during her final notes. The former Disney star and “Wrecking Ball” singer still has a magnetic quality about her husky voice, which she handily showed off in some unexpected vocal riffs. She was introduced to the stage by her dad and sister, Noah. “For the first time in years with pants on, my big sister Miley Cyrus!” she said — one of the evening’s most-tweeted lines.

The length: Anything over three hours is hard to sit through, especially when the surprises are slim to none. Only seven awards were handed out during the broadcast, and while many BTS fans had high hopes for a surprise performance, they were sadly let down. And with The Chainsmokers and Drake mainly sweeping the field, there was little in the way of unscripted excitement.

The hosting: While Ludacris and Vanessa Hudgens kept their interludes short and veered away from polarizing statements, the pairing felt unnatural. To start things off, Hudgens delivered Celine Dion and Nicki Minaj musical impressions. One went over pretty well. The other… not so much. Hudgens’s excessive outfit changes and on-air adoration of other stars were also distracting. But as she said during the show, they’ve already renewed her contract for next year.

The Chainsmokers and Halsey: In the first live award of the night, the team behind smash hit “Closer” ascended the stage. Halsey got to the mic first, but ultimately Drew Taggart and Alex Pall were the ones that delivered the thank-yous, giving her little chance to speak. It was awkward. During their second acceptance, Halsey took her moment to stake her claim as a Drake fangirl: “This feels good but it feels so wrong because I love Drake so much,” she said. Again, awkward.

The corporate plugs: Between shameless plugs for T-Mobile in a sponsored segment and for gadgets like a voice remote and a 360-degree camera, the heavy-handed integration of brands into the broadcast cheapened (and lengthened) the show.

Bruno Mars: Mars is a great showman. But piping in his performance from his concert in Amsterdam was unnecessary. Plus, the choice of song — “Versace on the Floor” — slowed things down considerably, and came late in the show’s run time, bringing the overall energy down.

Ed Sheeran: Sheeran also had a piped-in performance, this time from a show in Santiago, Chile. While his rendition of “Castle on a Hill” was perfectly good, what was the point? 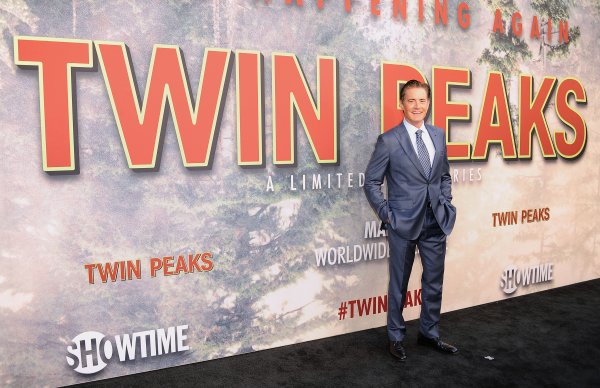 Review: Twin Peaks Returns to the Screen
Next Up: Editor's Pick