Eric Trump said in a new interview that his father’s decision to conduct unilateral missile strikes against Syria is proof he has no connections to Vladimir Putin and the Russian government.

“If there was anything that Syria did, it was to validate the fact that there is no Russia tie,” Eric Trump, who took over Donald Trump‘s real estate business after he became President, said in an interview with the British newspaper The Telegraph.

The United States launched missile strikes against Syria last week following a deadly chemical weapons attack in the country that killed dozens of civilians, including children. Russia is backing Bashar Assad and the Syrian government in the country’s six-year civil war. The U.S. is holding Assad accountable for the chemical attack, and has concluded Russia knew about the attack in advance, the Associated Press reports.

“If they disrespect us and if they cross us, fine. There will be no one harder — he has got more backbone than anybody,” Eric Trump said of his father. “He is not a guy who gets intimidated. I can tell you he is tough and he won’t be pushed around. The cards will shake out the way they do but he’s tough.”

MORE: The G-7 Wants Russia to Pressure Syria, But It Won’t Sanction Moscow

Questions of ties with Russia have dogged Trump and his associates since the 2016 presidential campaign. FBI Director James Comey has confirmed there is an ongoing investigation into possible ties between Russia and members of the Trump campaign during the 2016 election, and the House and Senate intelligence committees are conducting their own investigations into the matter.

The Trump Administration has repeatedly denied any connections to Russia. 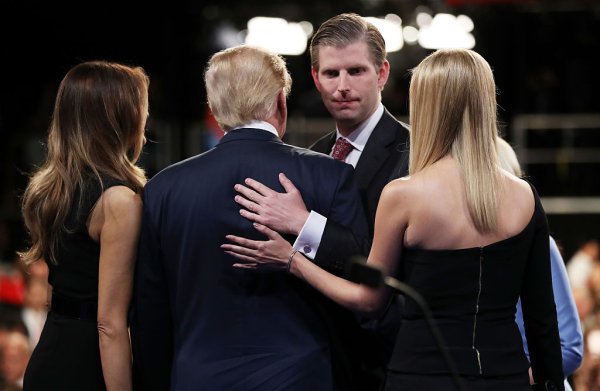