Sen. John McCain on Syrian Airstrikes: 'We Should Have Cratered the Runways’

Sen. John McCain said Sunday that the United States should have done more during its missile strike on a Syrian airbase — criticizing the Trump administration for not doing a “thorough enough job.”

The Arizona senator was specifically angry that following the missile strike last week, Syrian aircrafts were reportedly still able to take off from the airbase the U.S. struck.

“But the signal that they’re able to fly almost right away out of the same facility indicates that I don’t think we did as thorough enough job, which would have been cratering the runways,” McCain said in an interview with CBS’s “Face the Nation”. “And somebody will say, ‘Well, then they can fill in the runways.’ Yeah, and we can crater them again too.”

President Donald Trump defended the choice not to damaging the runways, tweeting Saturday that the craters would have been an easy fix.

McCain did praise Trump’s decision to strike Syria, calling it “an excellent first step” and “a reversal of the last eight years.” However, he also said the Trump administration is “partially to blame” for the use of chemical weapons on Syrians last week by Syrian President Bashar al-Assad.

“I think it probably was partially to blame,” McCain said.

He criticized Secretary of State Rex Tillerson’s stance on prioritizing efforts on the Islamic State of Iraq and Syria (ISIS) before focusing on Assad’s attacks on Syrians. McCain called the issues “totally connected.”

“We will take Mosul. We will take Raqqa. And we’d better have strategies as to how to handle those places once we have won it,” McCain said. “But they’re not disconnected from Bashar Assad and the Al Qaeda — the war crimes that have been taking place.” 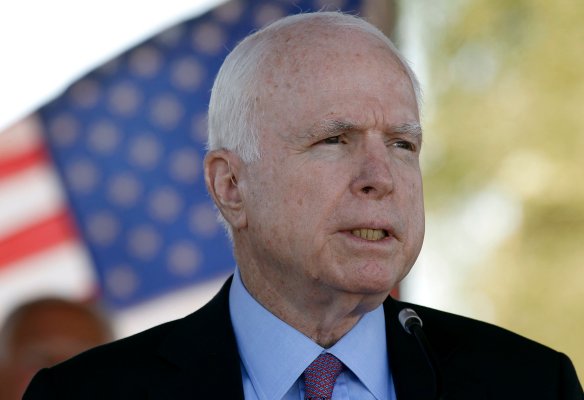 John McCain Slams Rand Paul Over Syria: 'He Doesn't Have Any Real Influence'
Next Up: Editor's Pick