James Corden may have regretted criticizing today’s divas after engaging in a highly-competitive ‘riff-off’ with Demi Lovato, who proved her point that modern divas can blow you away.

“Divas back then were just better than divas are today. Know what I mean?,” bemoaned Corden, on last night’s Late Late Show. “They didn’t have Instagram, they just had sass, voice, souls.” At this, Lovato stormed on stage. “If you think divas back then were better and I think divas today are better, why don’t we just settle this tonight?” she asked him.

Corden and Lovato then began an ‘impromptu’ riff-off, which began with Lovato singing Adele’s ‘Rolling in the Deep.’ Next, Corden threw himself into Tina Turner’s ‘River Deep, Mountain High,’ at which Lovato held her ear and made a highly unimpressed face. The competition continued with renditions of Aretha Franklin’s ‘Respect’ (Corden), Katy Perry’s ‘Roar’ (Lovato) and, finally, Lovato’s own ‘Heart Attack.’

After Corden admitted a miserable defeat, Lovato reassured him. “You’re the best damn diva I’ve ever seen,” she told him. “Maybe there’s a world where divas then and divas now are both great?” The pair then broke into a performance of Gloria Gaynor’s ‘I Will Survive.’ Watch the amusing clip below: 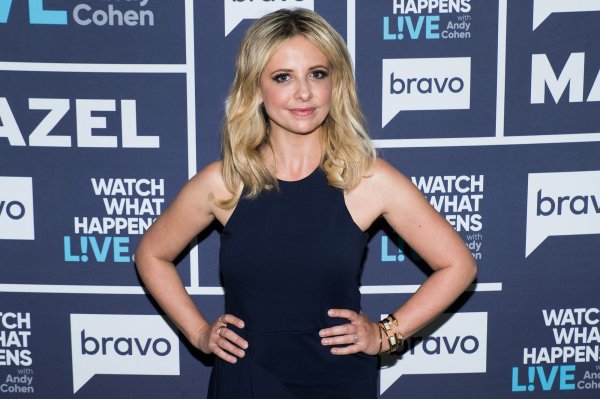 Lin-Manuel Miranda and Sarah Michelle Gellar's Unlikely Friendship Is Beautiful and Filled With GIFS
Next Up: Editor's Pick