President Trump on Syrian Chemical Weapons Attack: 'It Crossed A Lot of Lines For Me'

President Trump forcefully condemned Tuesday’s chemical weapons attack on civilians in Syria, saying it has let him to rethink his posture with regard to the regime of strongman Bashar al-Assad.

Speaking during a joint press conference with King Abdullah of Jordan, Trump called the attack, which killed women and children, an “affront to humanity.”

Trump continued to lay blame for the situation in Syria on his predecessor, President Obama, saying his failure to enforce his “red line” threat against the use of chemical weapons set the international community back in responding to Assad. But for the first time, Trump acknowledged he also bears responsibility for events that occur under his tenure as president.

“It crossed a lot of lines for me,” Trump said, when asked if the attack violated his own “red line.” “I now have responsibility,” he added.

Noting that he’s generally a “flexible” person, Trump offered a rare moment of public introspection. “That attack on children yesterday had a big impact, on me,” he said. “A big impact.”

The chemical strike came just days after the Trump Administration expressed the belief that Assad’s continued rule had become a “political reality,” breaking with the Obama-era calls for his swift ouster. But Trump signaled that might be changing, saying that his attitude toward Assad “has changed very much” since the attack.

Trump indicated he was open to a more forceful posture after the attack, but when pressed declined to go into details. “I’m not saying I’m doing anything one way or the other, but I’m also not going to be telling you,” he said.

Trump and Abdullah used the meeting to tout their common views on the fight to defeat the Islamic State, which has strongholds in swaths of Syria and Iraq. “We will destroy ISIS and we will protect civilization,” Trump said. He also announced that additional humanitarian aide will be freed up to assist Jordan in its “vital role” in resettling Syrian refugees.

Trump said the U.S. would work with “whomever is appropriate” to defeat ISIS, and warned that the group is metastasizing. “ISIS is one group, but others have formed,” he said.

The president has been reviewing a Department of Defense review of the U.S. strategy to combat ISIS, but Trump has yet to reveal its contents. Praising Abddullah’s role in the fight, Trump offered “It’ll be a shorter fight than a lot of people are thinking about.”

Abdullah used his opening remarks to pay service to Trump’s push to reshape American leadership in the world to an “America First” worldview, highlighting the role that other countries have in assisting in the fight.

Trump also used the opportunity to preview his upcoming meeting with Chinese President Xi Jinping, addressing the early-Wednesday launch attempt of a ballistic missile by North Korea. Trump says he takes responsibility for that situation as well, as his administration warns that time is running out for a diplomatic solution to the rogue nation’s pursuit of nuclear weapons capable of hitting the U.S. 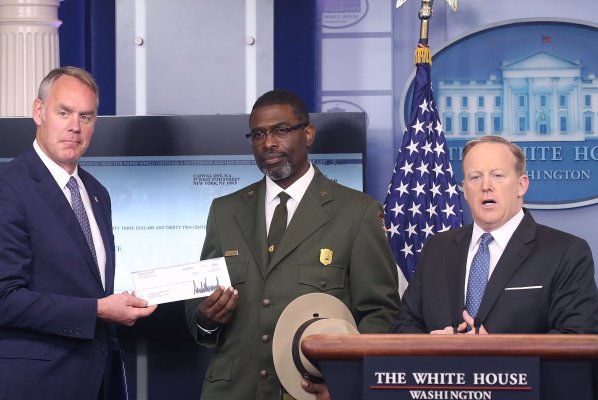 President Trump Donated $78K From His Salary to National Parks. He Wants to Cut Down the Department That Funds It
Next Up: Editor's Pick