Mixed Messages on the CBO Score

The Republican health care plan is struggling to overcome a tough Congressional Budget Office score, which estimated it would remove 14 million people from health insurance coverage. The law would save the federal government over $300 billion, in large part because fewer people will be getting care subsidized by the government. Additionally, the CBO estimates that premiums will rise dramatically in the initial two years of the law—as healthier people who don’t want insurance drop off the rolls— before declining afterward. The GOP can’t quite get its message straight on the score. Speaker of the House Paul Ryan touted the score as a positive development, while over at the White House, HHS Secretary Tom Price told reporters, “We disagree strenuously with the report that was put out.” In any event, the CBO only scored “Phase 1” of what the GOP claims is a three-phase plan, with the final two phases respectively involving regulatory changes and the passage of new legislation with a 60-vote majority threshold in the Senate. But the CBO only scores legislation, and Republicans have been largely silent on what their complete legislative package would look like—and many Republicans doubt they’ll ever get the change to complete “Phase 3.”

Republican Sen. Tom Cotton, a Trump ally who has become a critic of the legislation, explained it as follows to conservative radio host Hugh Hewitt Tuesday morning: “There is no three-phase process. There is no three-step plan. That is just political talk. It’s just politicians engaging in spin. This is why. Step one is a bill that can pass with 51 votes in the Senate. That’s what we’re working on right now. Step two, as-yet unwritten regulations by Tom Price, which is going to be subject to court challenge, and therefore, perhaps the whims of the most liberal judge in America. But step three, some mythical legislation in the future that is going to garner Democratic support and help us get over 60 votes in the Senate. If we had those Democratic votes, we wouldn’t need three steps. We would just be doing that right now on this legislation altogether. That’s why it’s so important that we get this legislation right, because there is no step three. And step two is not completely under our control.” With friends like those, this legislation appears to be in serious trouble.

President Trump grants the CIA new drone powers. The latest on Trump Force One. And inside Trump’s Lawyers’ plans for a White House assault on the “administrative state.”

White House Seeks to Cut Billions in Funding for United Nations
U.S. retreat from U.N. could mark a “breakdown of the international humanitarian system as we know it.” [Foreign Policy]

Trump Force One Is Ready for Takeoff
After decades in the sky, the president’s fleet is finally getting an upgrade—unless the new passenger-in-chief adds turbulence. [Bloomberg]

“The plan is not done yet.” — Spicer on the counter-ISIS strategy review ordered by Trump

President Trump Made 3 Big Promises on Health Care. The Budget Office Just Undercut All of Them [TIME]

Republicans Are Bashing Their Own Accountants. They Didn’t Always Feel That Way [TIME]

Cuts to State will be reduced in final Trump proposal [Politico] 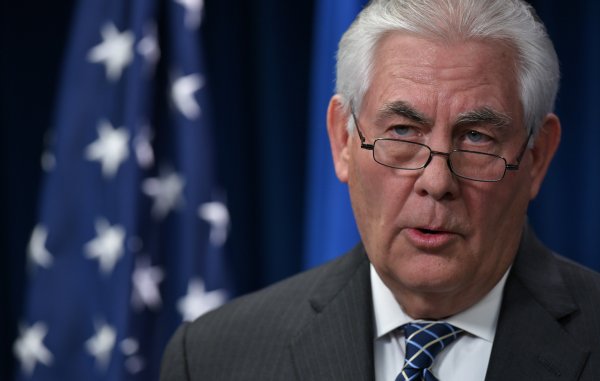