The widow of a Navy SEAL killed in Yemen got the most extended applause of the night during President Donald Trump‘s address to Congress, wiping away tears as the room cheered her with a long standing ovation.

Carryn Owens, the widow of U.S. Navy Special Operator, Senior Chief William “Ryan” Owens, was visibly emotional as the President spoke about her late husband. “Ryan died as he lived: a warrior and a hero, battling against terrorism and securing our nation,” Trump said. “As the Bible teaches us, there is no greater act of love than to lay down one’s life for one’s friends. Ryan laid down his life for his friends, for his country, and for our freedom. We will never forget him.”

Carryn Owens cried and periodically looked up to the sky amid the applause, seated next to First Daughter Ivanka Trump as one of the President’s guests for the evening. The applause went on for so long that the President quipped she had broken a record.

Ryan Owens, killed during a raid on an al-Qaeda compound in Yemen, was the first known U.S. combat casualty of Trump’s presidency. 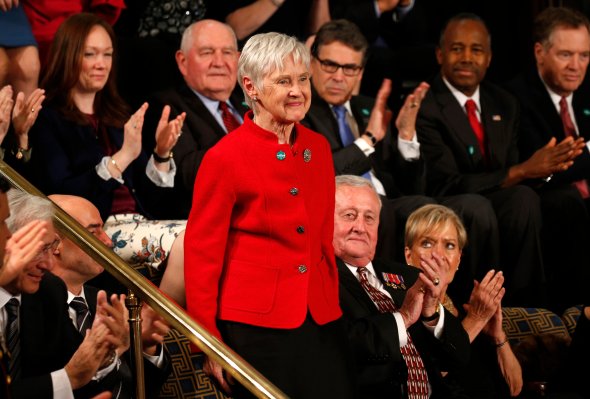 Watch Antonin Scalia's Widow Get a Standing Ovation Before Congress
Next Up: Editor's Pick