The 89th Academy Awards proved to be one of the most memorable nights in showbiz history, thanks to a jaw-dropping mix-up where La La Land was mistakenly announced as the year’s Best Picture before Moonlight was announced as the true winner. It was a shocking situation that confused just about everyone, including all of the stars in attendance at the ceremony. Best Actress winner and La La Land star Emma Stone, took time in her post-show interview to share how happy she was about Moonlight‘s win, while others, like Oprah Winfrey and Jessica Chastain, took to their Twitter accounts to share their excitement for Moonlight’s win.

See the 21 best celebrity reactions to Moonlight‘s incredible Best Picture win at the 2017 Oscars below.

Emma Stone had an “OMG” moment on stage when she realized that Moonlight was the real Best Picture winner. In her post-show interview, she revealed that she was beyond happy for their win. “I f—ing love Moonlight,” she said. “Of course it was an amazing thing to hear them say La La Land — we would have loved to win best picture, but we’re so happy for Moonlight. I think it’s one of the best films of all time, so I was pretty beside myself.”

The surprise ending made this Oscars ceremony one of the best for Oprah Winfrey.

Actor Constance Wu couldn’t contain her excitement for the cast of Moonlight.

Ellen DeGeneres noted that this memorable moment was only possible on live TV.

While Moonlight director Barry Jenkins was still in shock over the win.

Jessica Chastain had nothing but love for Moonlight’s win.

Gabrielle Union had all of the feelings after Moonlight was revealed as the true winner.

Ryan Gosling had a giggle after it was discovered that Moonlight was the real winner of Best Picture that night.

And Samuel L. Jackson got a little emotional after Moonlight was revealed the Best Picture winner.

While Chelsea Peretti had a very visceral response.

Aja Naomi King was beyond excited for Moonlight’s win.

And even Shonda Rhimes, queen of the plot twist, was shocked by the Best Picture mix-up.

Issa Rae couldn’t contain her euphoria about the Moonlight win.

While Katy Perry was in complete shock that the mix-up happened.

The cast of Moonlight couldn’t contain their excitement as they took the stage to accept their award.

Bette Midler was happy that she stayed up to watch the twist ending. 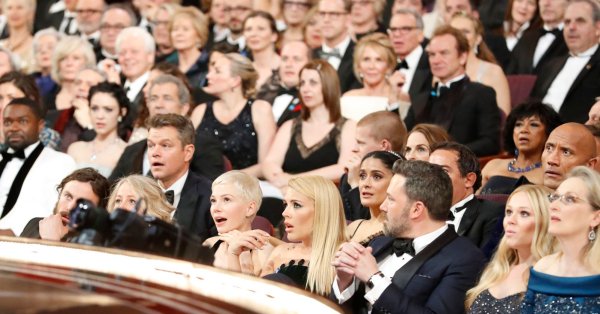 See the Looks on Celebrities' Faces at the Exact Moment of the Oscars Mix-Up
Next Up: Editor's Pick