For the first time in Oscars history, the wrong Best Picture winner was announced. La La Land was declared the winner and the acceptance speeches had already begun when the mixup became clear and the true victor, Moonlight, was announced. The chaotic — and awkward — moment is all anyone can talk about. Here’s what we know:

The award was announced by Hollywood veterans Warren Beatty and Faye Duanway. Beatty opened up the envelope and in what was interpreted as an attempt to be funny, paused and looked at Dunaway. “”You’re awful!” Dunaway said, seemingly thinking her co-presenter was trying for a laugh. Beatty handed her the envelope and Dunaway promptly announced “La La Land!” It’s now emerged that Beatty was handed the wrong envelope — one that read “Emma Stone, La La Land.” Stone had just been announced as the “Actress in a Leading Role” winner.

The musical film’s cast and crew gathered onstage and producer Fred Berger was midway through his speech before the mistake became clear. “We lost, by the way,” Berger said, as the confusion onstage mounted.

Jordan Horowitz, another La La Land producer, then took the mic to clarify. “This is not a joke,” he said “Moonlight has won Best Picture. Moonlight. Best Picture.” Horowitz was praised online for handling the situation with dignity. Oscars host Jimmy Kimmel tried to lighten the mood with a joke as the cast of Moonlight made their way to the stage. “I would like to see you get an Oscar anyway — why can’t we give out a whole bunch of them?” Kimmel said to the La La Land team. Beatty then returned to the stage and explained the envelope debacle.

Whose fault was it really?

The accountants probably deserve the blame. Accountancy giant PricewaterhouseCoopers has been in charge of counting the votes for 83 years. A team of PwC officials, including supervisors Brian Cullinan and Martha Ruiz, are stationed on either side of the stage. The team is in charge of handing over envelopes — the right ones — to announcers. Somehow Beatty ended up with the Best Actress envelope, which Dunaway then misread. Live on stage. To millions watching.

(MORE A Roundup of Every Political Moment at the 2017 Oscars)

What’s with the multiple envelopes?

In a backstage interview after the ceremony Emma Stone caused further confusion when she pointed out that she was holding her “best actress card the whole time.” It turns out that this was part of the problem: there are two sets of envelopes for each category — so while Stone walked off with one card, Beatty was handed the other one backstage before the Best Picture announcement.
“We sincerely apologise to Moonlight, La La Land, Warren Beatty, Faye Dunaway, and Oscar viewers for the error that was made,” a Pwc statement said. 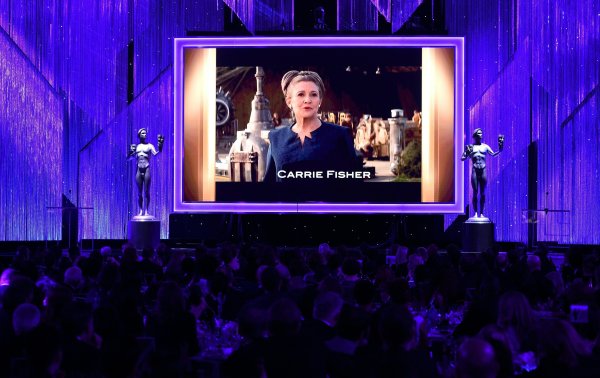 'I Am Alive and Well.' Australian Producer Mistakenly Included in Oscars 'In Memoriam' Segment
Next Up: Editor's Pick