Every Record Broken at the 2017 Oscars

The biggest surprise of the night at the Oscars turned out to be the shocking mix-up that had the wrong movie (La La Land) onstage to accept the award for Best Picture (Moonlight, as it turned out). In fact, though La La Land won several awards, the musical did not come anywhere close to breaking the record for most Oscars, as some thought it might. Although there were more records that weren’t broken Sunday night—Lin-Manuel Miranda didn’t get that elusive EGOT, Denzel Washington and Meryl Streep didn’t break acting records—there were still a handful of awards that did make history.

Mahershala Ali became the first Muslim actor to win an Oscar. Ali broke a barrier with his win for Best Supporting Actor in Moonlight, in which he plays a tender father figure to a lost young man. In his speech, he thanked his teachers, who told him, “It’s not about you… You’re in service to these stories and these characters.”

Viola Davis became the first black person to receive the triple crown of acting. Davis’ win for Best Supporting Actress in Fences makes her the first black actor, male or female, to win a competitive Oscar, Emmy and Tony—a feat previously accomplished by only 13 women and 9 men, including Helen Mirren and Christopher Plummer.

O.J.: Made in America became the longest film to win an Oscar. Though many debated whether Ezra Edelman’s documentary really qualified as a movie—it initially ran as a docuseries on ESPN, though it had a qualifying theatrical run—it made the cut and, at 467 minutes, beat War and Peace by more than half an hour. 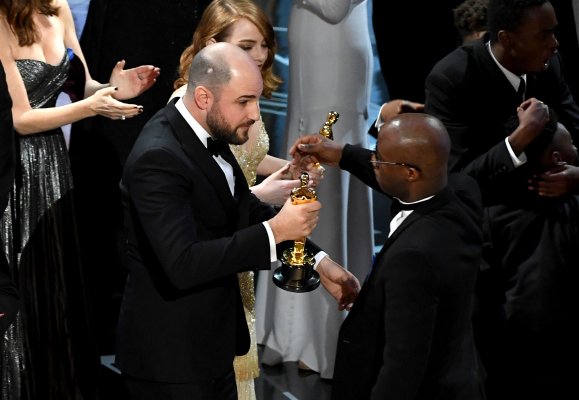 What Really Went Down After the Mix-Up
Next Up: Editor's Pick