Family members of 9/11 victims gathered in lower Manhattan on Thursday morning, blocks away from the World Trade Center, to call on President Trump to stop using the attacks to defend his recent immigration ban.

“We’re here to say, Stop using our loved ones to justify the same type of hatred that killed them,” said Terry McGovern, whose mother died in the Sept. 11 attacks.

McGovern helped organize Thursday’s rally in Battery Park after she saw 9/11 invoked in Trump’s executive order, which temporarily banned immigration from seven majority-Muslim countries. Trump had said the immigration ban was necessary to prevent similar attacks from taking place in the future, but none of the Sept. 11 hijackers came from the seven countries affected by his order.

The ban suffered legal blows in the past week, as a federal appeals court upheld a temporary restraining order that stopped it from being enforced nationwide. Trump now plans to introduce a replacement for the order.

“This ban is not in the spirit of New York or America, which is so reflected right here by the Statue of Liberty,” Brendan Fay said Thursday, gesturing across the Hudson River. He was friends with Father Mychal Judge, the chaplain for the New York City Fire Department who died at the World Trade Center.

“I hope they sense how serious the situation is right now, that so much is at stake,” she said. “They need to realize the urgency of the moment and take action.”

Among those remembered at the rally was Lt. Joseph Leavey, a first responder who was killed when the World Trade Center’s South Tower collapsed. Before becoming a New York City firefighter, Leavey was an engineer, and his construction career included work on Trump Tower. On Thursday, his stepdaughter, Kerri Kelly, was part of the group of about a dozen family members speaking out against Trump’s immigration policies.

“I think a lot about who he was and what he would’ve wanted and what that sacrifice was for, and I feel wholeheartedly that it wasn’t for this. It wasn’t about more fear, more security, more disruption, more war, more violence,” Kelly said. “It was the opposite. It was about how we show up for each other as Americans.” 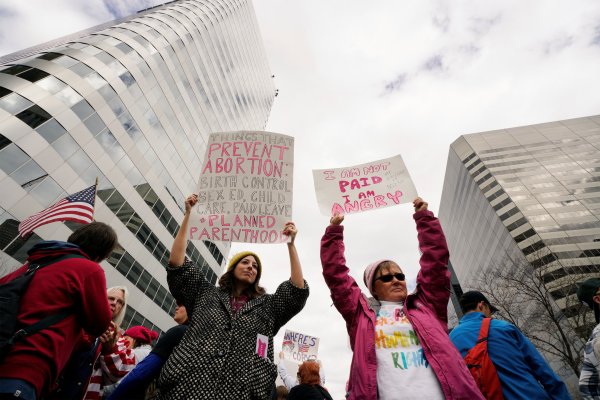